The Washington Wizards have won 36 games so far this year. They have put themselves squarely in the Playoff race with the sixth seed in the Eastern Conference standings. It is the first time they could say any of that since 2008. Barring some epic collapse, Washington will be back in the Playoffs this season.

For John Wall, it feels like it is about time.

Wall was the top overall pick in 2010 and has not even sniffed anywhere close to the Playoffs. You could sense that Wall was hungry for more as he has improved his game in the past four seasons. He broke through for an All-Star appearance this year and the Wizards had completed shedding some of the bad apples in the locker room to give him and the organization a chance to win.

This season had the goal squarely to make the Playoffs though and take that next step. And the Wizards have succeeded in that (almost officially). They are three wins or three Knicks losses away from clinching that first Playoff spot since 2008.

For many players on the Wizards, it is about time for this team to start winning, and they feel that pressure. 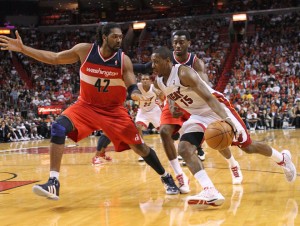 “Obviously we realize it’s about time for us to start winning,” Wizards center Marcin Gortat said. “It’s about time to clinch that spot and get those wins. We’ve just got to build the habit to start fighting for 48 minutes to make the plays like that at the end. Today [an overtime win against the Magic] John really showed that he is an All Star. He had an incredible few shots that he really made for us. He carried us through the rest of the game.”

Wall has been the team’s savior in many, many ways throughout the season. He was deservedly a first-time All Star and is averaging a career-best 20.0 points per game and 8.8 assists per game. He has put up some impressive raw numbers, although his advanced statistics are not nearly as efficient.

His emergence and maturation has been a top reason for the Wizards getting back into the Playoff discussion.

But it has been a whole bunch of other players stepping up and stepping in for the Wizards. That has been a byproduct of a team where players know their roles and have stepped into them nicely with a coaching staff that expects more from them.

“I think that is an extension of our coaching staff,” Trevor Ariza said. “Our coaching staff always fight. They are going to be on us every second of the game if we’re not doing what we’re supposed to do. That carries over to the players and the players, we hold each other accountable. When we’re together, doing what we’re supposed to do, it gives yourself a chance to win.”

Having players who have made deep Playoff runs and expect Playoff greatness like Ariza and Gortat have helped this young team tremendously for sure. They have spent their time this season trying to keep the young team focused on that final goal and on shedding the team’s horrid history of late.

Marcin Gortat has even gone as far as to call the Wizards “mentally weak” recently following a difficult loss. There is a heightened alert to how this team wants to play and wants to be. They are not so much playing against their opponents as they are playing against an ideal of themselves.

That might be going far, but the Wizards need that edge to get over their poor history and be the best they can be.

Washington is back in the Playoffs finally and are beginning to reach their potential. The Wizards are finally starting to put the pieces together.

“We know each other more,” Ariza said. We’re more confident with each other. We hold each other accountable for each other’s mistakes. We’re hungry. We want to win.”