The Washington Wizards are a fringe playoff team no more. The Wizards finally catapulted themselves into the playoff conversation for good last year, as John Wall and company won their first round playoff series and even gave the Indiana Pacers a solid fight in round two.

After adding veteran presence Paul Pierce in free agency and keeping most of their big-name free agents, Washington could be primed for an even deeper run as they prep for the 2014-15 NBA season.

And with that, the price for Wizards tickets have increased this year as fans hope for an improvement on the 2013-14 campaign.  Currently, the average ticket price is $104.46 for Wizards tickets in 2014-15, a slight uptick of eight percent compared to last year’s prices. Fans are certainly expecting bigger and better things for Washington this season.

The Wiz will need to have that winning mentality in mind if they want to defeat the team expected to win the Eastern Conference this year: LeBron James and the Cleveland Cavaliers. The Cavs pose the biggest threat to the Wizards and will be an incredibly difficult matchup if they ultimately meet in the playoffs, renewing that underrated rivalry of the mid-2000s.

Below is a breakdown of their four matchups, as well as information on Wizards vs. Cleveland Cavaliers tickets from Coast to Coast Tickets. 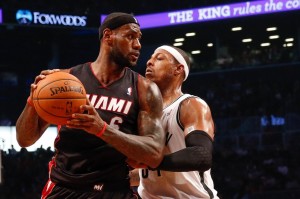 Only a few days later, Washington will head out to Quicken Loans Arena for the first road game in Cleveland.  Tickets begin at $113 and have an average ticket price of $300, presently.

On February 20, LeBron and company will be back in D.C and tickets are a little pricier than the late-November meeting.  Nonetheless, Verizon Center parking is only $6 for this game so you will not have too many outside costs.

In the final game of the season, the Cavs will host the Wizards on April 15.  Expect prices to fluctuate a bit for this game, especially if both teams have locked up playoff spots and don’t have anything remaining to play for.  It is very possible that get-in price of $73 could drop much, much further if LeBron and/or Kevin Love do not dress.