We’ve been busy taking a look at the greatest championship and non-title teams, the best players at every position, and the greatest never to win a title — among other rankings — this summer.

Today, I tackle the holy grail of basketball questions: Who are the greatest players to ever play the game?

There’s no perfect science to this question. It’s a lonely, subjective process. I welcome feedback — just know that I’m right and you’re wrong.

BUT FIRST… A quick honorable mention (Nos. 6-10). Linked to their names are past articles where Matt Zemek and I discuss these player’s accomplishments in finer detail. 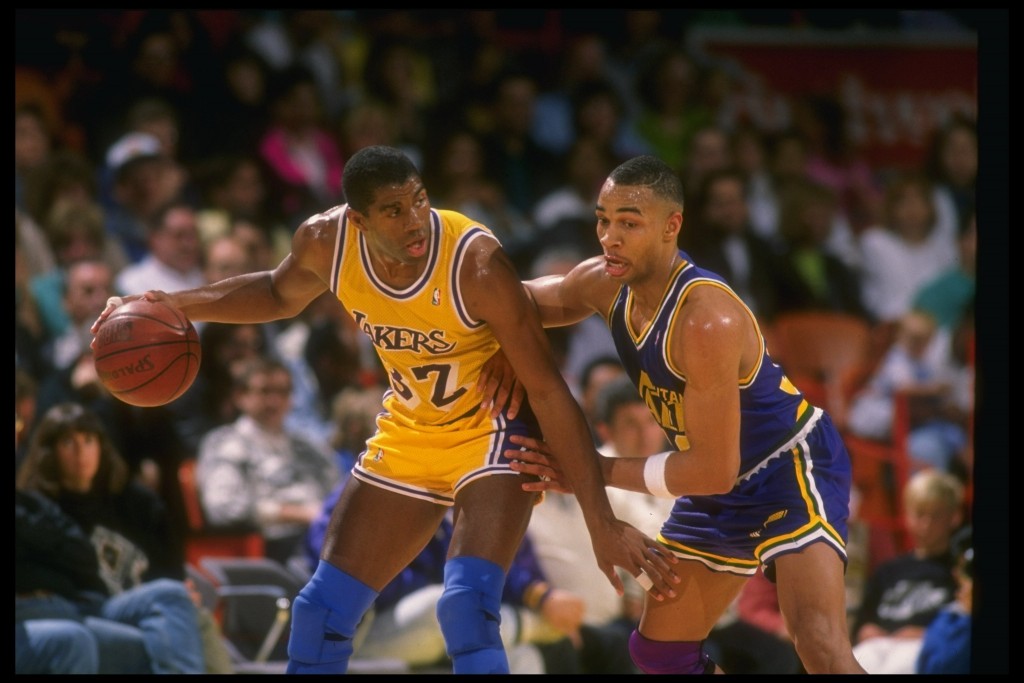 Matt and I both consider Magic to be the greatest point guard ever. There’s not much of a way to argue against it.

Magic averaged 11.2 assists per game, the best clip ever, and finished Top 2 in passing 10 different times. From 1983 to 1987, Magic led the NBA in assists four times, including a peak season with 13.1 dimes. Meanwhile, Magic maintained his career 19.5 points and 7.2 rebound figures, all while shooting 52 percent from the field. He was truly an offense to himself — leading one of the greatest outfits in basketball history.

Oh, right, I forgot to mention: Magic Johnson was 6-foot-9. What I would do to watch him hoop in person.

Yes, there’s a lot of complicated headlines to sift through when looking at his total career. This isn’t the space for that.

How about this: Why do I have Magic over LeBron and Bird? While Magic has more rings than both, he also never won a title without Kareem, and both LeBron and Bird were the best players on each of their titles.

Right. However, all three players had outstanding help, and while Kareem is the better individual player for their careers, the ’80s Lakers were playing to Magic’s style by the second title. With each wave of Magic’s career, those Lakers teams got better and better, peaking in back-to-back titles in ’87 and ’88.

If Bird was healthier late in his career, perhaps it’s a different discussion, and of course LeBron has a chance to climb this list in a hurry before his playing days are over. For now, Magic Johnson is one of the five greatest NBA players of all-time.

Many will argue Wilt Chamberlain has to be first or second on this list because he scored 100 points in a single game, or variations of that sentiment. He was the single most physically dominant player in the history of the sport, and his career stats read back like videogame numbers on rookie difficulty.

Wilt the Stilt eventually won two titles to go along with four MVPs. By the end of his career, he was stat-chasing so hard that he pulled off crazy feats like leading the NBA in assists (’68) and shooting 72.7 percent from the field (’73).

On the other end of the career spectrum is Kareem Abdul-Jabbar, a player who won Finals MVP awards 14 years apart, and who is the all-time leader (comfortably, I might add) in points and win shares.

A 6-time champion and MVP, Abdul-Jabbar has the game’s greatest signature shot, and he changed the sport at every level — from his dominance in high school out of New York, to his dynasty building with coach John Wooden at UCLA, to winning MVP and the NBA Finals with Milwaukee in his second season.

Why Kareem over Wilt? It’s fair to argue the 1960s were more competitive than the 1970s, and that Wilt faced stiffer competition than Kareem did with the Bucks. While both players used the Lakers to join forces with other superstars (Wilt joined forces with Jerry West; Kareem and Magic won five titles), Wilt supporters would argue Chamberlain was the best player on those early-70s teams, while Kareem was second to Magic on the majority of those title teams. Kareem won the ’85 Finals MVP because he led the Lakers in points, but Magic (18.3 points, 6.8 rebounds, 14.0 assists and 2.2 steals) was the straw that stirred the drink, and Kevin McHale was torching the Lakers inside the entire series. 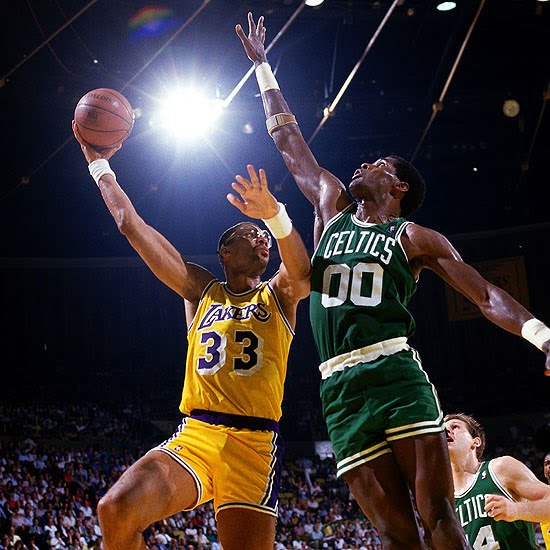 Look, I get that Wilt Chamberlain is the greatest individual talent of his era and possibly any era. There are two truths, however, that I can’t get over: (1) he played in a fast-paced, stat-stuffing era where everybody else was smaller, weaker and nobody played defense (besides Russell’s Celtics), and (2) he only beat Russell one time in the playoffs.

I can hear the boos already. Russell’s teams were better. Wilt can’t play every position. I hear you, I really do.

Six times out of seven, though? When Wilt is supposed to be the greatest player on Earth? Russell’s Celtics even took out Wilt’s Lakers in 1969 when they had no business doing it, when Jerry West was averaging nearly 40 points and Russell was on his last legs. In the close out game, with Boston coming off a Game 6 victory, Russell held Wilt to 18 points, and the Celtics won by two.

The only time Wilt took down the Celtics in the playoffs was 1967, and his supporters have nothing to say about that supporting cast — those 76ers were LOADED.

If Wilt was truly the greatest player of all-time, why did Russell own him so bad? Russell tells stories now about letting Wilt score a basket or two in a row to fool him, then taking the move away in the fourth quarter and sending Wilt into a panic. Jordan never let his opponents figure him out.

While Kareem certainly didn’t have a Russell to battle in his prime, he did dominate the competition in front of him. As the greatest physical specimen of his time, Wilt, like Shaquille O’Neal decades later, left trophies on the board. Kareem didn’t. 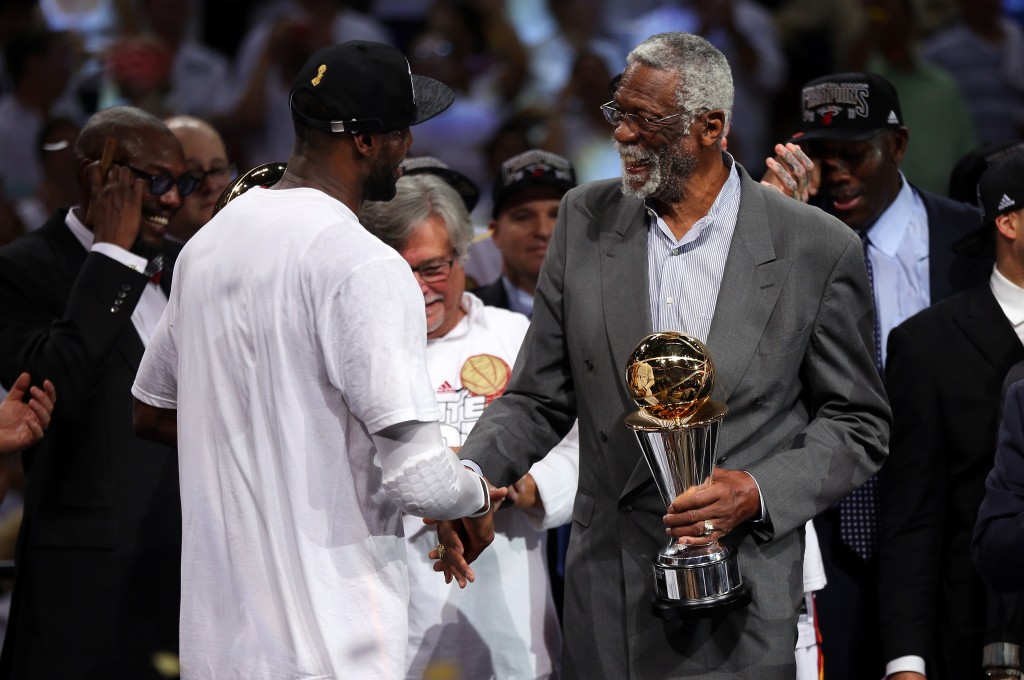 What’s more incredible: winning 11 titles in 13 seasons in the 1950s and 60s, or captivating the entire world and spreading two 3-peats across a decade of the best basketball ever played?

Russell is No. 2 over everybody else because he spearheaded the first great defenses in the sport’s history and won nearly twice as many titles as any Hall of Famer from another team.

He’s ahead of Wilt because he owned Wilt. He’s ahead of Kareem because he made a greater impact on the game. Yes, Kareem won as many titles as Jordan and more MVPS, but for myriad of reasons he didn’t resonate with basketball fans the way Jordan, Magic and Bird did, or the way Russell has retroactively as the sport has (correctly) raised his platform.

There’s only man who transcends Russell…

There’s only one Michael Jordan.