Early detection saves lives. There’s no denying Brad Stevens is the brightest young coach in basketball. Boston has accumulated a nifty bundle of assets, and playing in the Eastern Conference has yielded some early playoff experience for this young group.

Let’s just face the facts, though: Boston has a problem. The Celtics have a combo guard fetish.

What started as a mild attraction has rapidly morphed into an addiction. The Celtics traded for Isaiah Thomas after drafting Marcus Smart and James Young and paying Avery Bradley starter’s money before the season. The deal was defended as “a value move.” Fair enough: Thomas’s contract is team-friendly, and he provides necessary scoring and creation, skills that lifted the Celtics into the playoffs.

They should have drawn the line at Thomas, but the Celtics couldn’t put down the duckie. They drafted not one, but two athletic wings with unfinished games in June. They reached for Terry Rozier, arguably the most questionable pick of the draft, with a bevy of more interesting prospects still on the board.

Rozier and R.J. Hunter are not just combo guards, but “projects,” and they need playing time in order to justify their selections. With what playing time, I’d ask Boston’s brass?!!

This Boston roster has been overtaken by weed-like growth from two types of players — undersize guards stuck in between the 1 and 2, and power forwards who don’t defend the rim or stretch the floor. These are not bad basketball players. In fact, that’s the problem: Boston has reached a saturation point of talent at redundant positions. 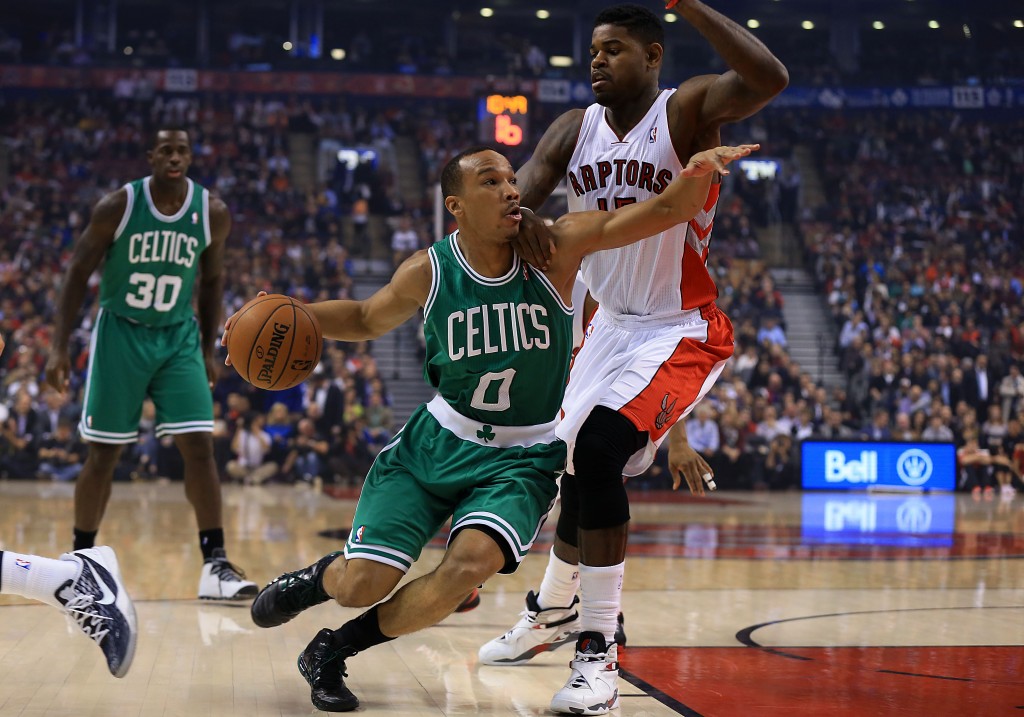 Avery Bradley doubles as the quintessential Celtics combo guard and the most expensive. Last summer, Boston re-signed Bradley to a 4-year, $32 million deal. The contract escalates in value — Bradley will make $7.7 million in 2016, $8.3 million in 2017 and $8.8 million in 2018. His deal is a bargain: a 24-year-old with his reputation on defense could demand closer to $11-12 million on the open market.

Let’s separate what Bradley is from what he isn’t. He’s a terrific defender, capable of harassing point guards over 94 feet, but he’s unconventional offensively. At 6-2, Bradley would ideally start at point, the same position he defends so well. However, Bradley has averaged 2.1 assists or less in each of the past three seasons — he’s a 2-guard in a 1s body.

The thing is, Bradley isn’t much of a shot-maker either. Bradley has an OK stroke from deep: he shot 39 percent from 3 in 2013-’14, though that clip fell to 35 percent last season on more attempts. When defenders left him open last year (NBA.com determines open to be 4-6 feet from the nearest defender), Bradley only connected on 32.9 percent of his 3s.

He isn’t an effective driver — Bradley’s field goal percentage drops under 50 percent on all shots following at least one dribble, per NBA.com, and 42.4 percent shooting after 3-6 dribbles. His FG% the past two seasons hovered around 43 percent.

Bradley is a commodity because of his perimeter defense, and his deal will age brilliantly into the new salary cap landscape. However, this young Boston team has so much youth at the guard positions — guys who need to play in order to get better. Bradley is closer to Tony Allen than Mike Conley — a team with playoff aspirations such as Boston likely can’t get away with starting Bradley against superior competition. 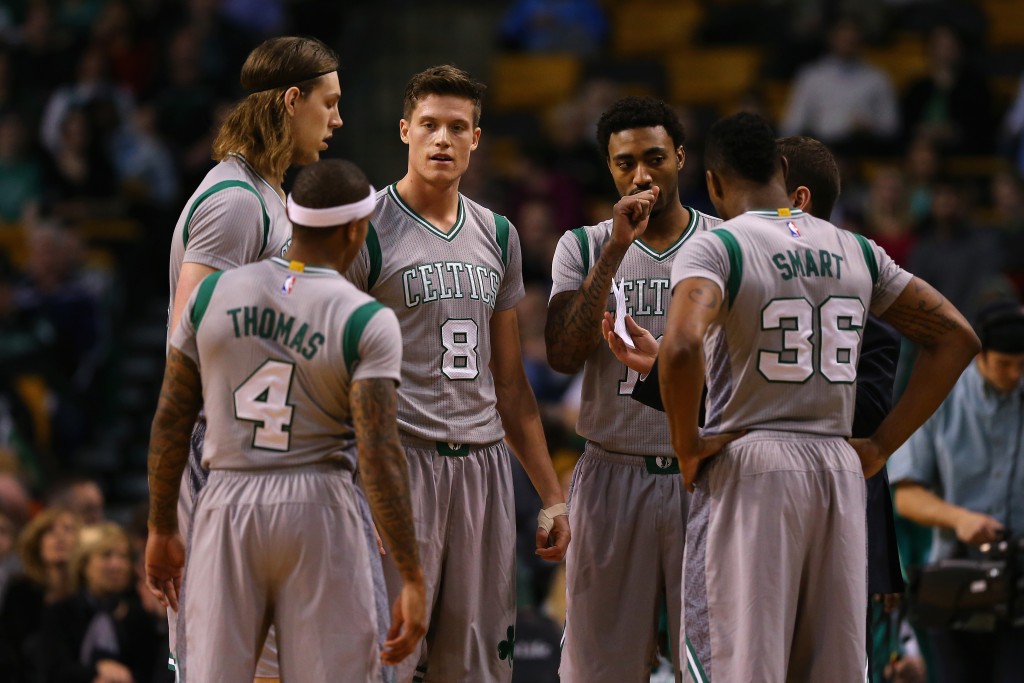 Thomas and Marcus Smart are the two best guards on this Celtics team. That isn’t saying much — outside of Bradley, the only other perimeter player with experience to write home about is Evan Turner (who I’ll get to a little bit later).

The Celtics were 14-7 with Thomas on the floor after acquiring him at the deadline. Thomas scored 19 points in 26 minutes coming off the bench for Boston, adding a tangible spark to a team devoid of much offensive diversity. His shooting clips were, umm, a bit distracting (.412/.345/.872), but until the Celtics acquire the superstar they’ve been stockpiling goodies for, Thomas is the closest thing they have to a No. 1 option.

Smart was the team’s No. 6 overall draft selection in 2014, and with that comes plenty of expectations, fair or not, that he’ll make a significant leap in year two. His shooting kept him off the floor at times (.367/.335/.646), and unlike Thomas, he hasn’t yet developed a bundle of go-to moves that work at the next level.

Smart is closer to a traditional lead guard than Thomas, with the added bonus that he can check 1s and 2s on defense. At 6-4, Smart has enough size to make plays while he’s growing his sea legs — he averaged 3.1 assists in 27 minutes.

Looking at Steven’s backcourt rotations after the All-Star break, it’s clear Thomas was the key cog in creating a passable offense. And yet, Smart and Bradley logged more than twice as many minutes (Note: Thomas missed nine games):

Starting Bradley and Smart together is about defense, and as Smart develops as a playmaker and scorer, they will become a more well-rounded tandem. Thomas should be coming off the bench where his lightning in a bottle scoring makes a larger impact, and there’s no way Smart/Thomas will maintain a sub-100 DefRtg over a full season. 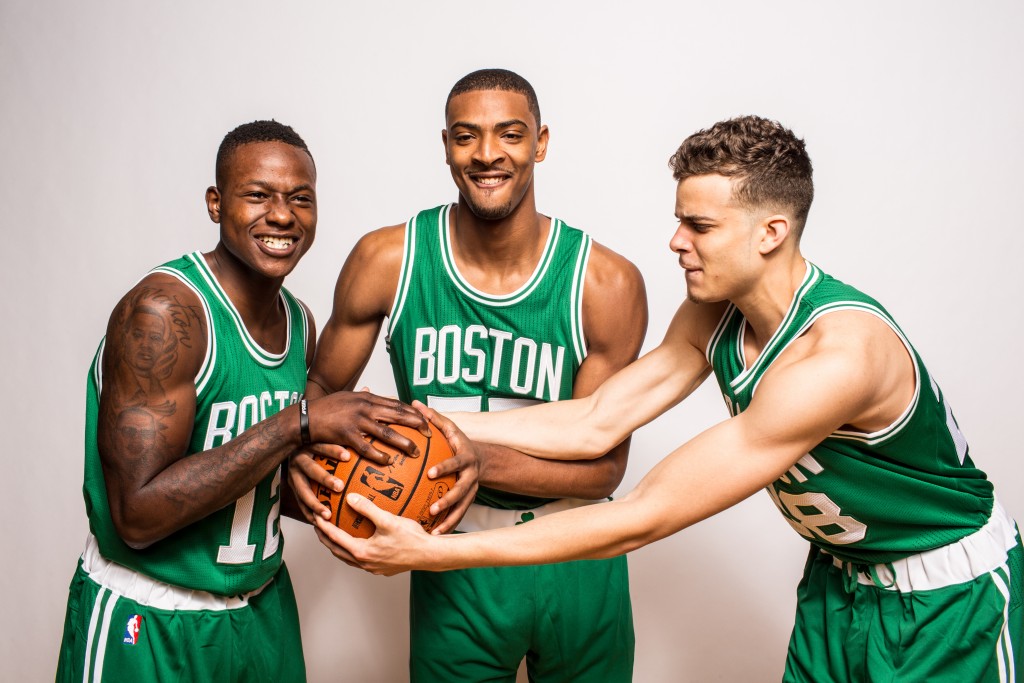 If Smart/Bradley/Thomas receive the majority of the backcourt minutes in Boston, it would allow the team to build decent continuity over 82 games. These Celtics aren’t going to be world beaters on defense, but as long as they replicate their league-high pace, they will score enough to contend at the bottom of the East.

This is where their fetishization may come back to the bite them. Boston has devoted four first round picks in two years to guards who can’t man the point. The four youngsters, Bradley and Thomas cost roughly $22.7 million combined this season.

That’s nothing in terms of the cap, but the opportunity cost — of drafting these players, of re-signing Bradley to a $32 million deal, and trading for Thomas — hinges on them playing. Good contracts stop being good if the players aren’t contributing something real.

This is where the “fresh car off the lot” metaphor comes into play. By selecting Rozier at No. 16, a reach no matter how you shake it, Boston has invested a real asset (not to mention nearly $2m in 2015-’16) in him: Rozier has to play. Regardless of whether he plays or not, however, his value has been depreciating from the moment they selected him.

Harsh? Look, I hope the guy wins 10 MVPs and 18 championships. The bottom line is Rozier, Hunter and Young are players with large holes in their games, and Young, only 20, is hoping to shed the looming bust label bursting through his skin.

There’s also Evan Turner, who was second on the team at 30.7 minutes per game after the All-Star break and was far away the team’s best creator with the ball — he averaged 6.9 assists over the final 31 games.

Turner and Jae Crowder logged 426 minutes after the All-Star break, and outscored opponents by 5.6 points per 100 possessions, per NBA.com. Lineups built around Turner and Crowder scored 110.9 points per 100 possessions last season, and sandwiching the Bradley/Smart/Thomas backcourt trio around them at the forward spots has great scoring potential.

I mention Crowder because Boston inked him to a 5-year deal this summer. While he has awesome Draymond Green-light potential as a small-ball 4, Crowder will inevitably log more minutes at the 3 this season, what with Boston collecting power forwards with equal tenacity as combo guards these days. Both will play and play together, but Turner is clearly a placeholder for somebody else — the star playmaker Boston hopes to bring into the fold sometime in the next 12 months.

Turner is playing on an expiring $3.4 million deal, and it’s likely he means more to Boston than he would somebody else. Contenders looking to add juice to their bench will kindly point to the failed Turner experiment in Indiana — the straw that broke the camel’s back for the Roy Hibbert/Paul George-era Pacers — in trade negotiations.

In the meantime, Turner is another mouth to feed in a crowded guard rotation. He’s the best passer on the team, but the cost of playing Turner 25-30 minutes a game is letting two year’s worth of first round picks accumulate rust on the pine.

Boston is one of the strangest teams to predict for the upcoming season and beyond. The East is slowly ramping up, and 40 wins might not be enough to crack the postseason this time around. The Celtics are one of the eight most talented teams in the East, and their peculiar team building leaves them impervious to catastrophic injury — Stevens can just call the next man up.

Where this team goes two, three, four years from now, though, is completely up in the air. As I wrote about this week with Brooklyn, that’s an unsettling place for a major sports franchise to be.