The Brooklyn Nets won 38 games last season — enough to fall ass backward into the No. 8 seed and host three playoff games, but not enough to justifying the hundreds of millions of dollars its high profile owner was pouring into the team.

I’m not going to retread old news. The Nets mortgaged their future by trading for Kevin Garnett and Paul Pierce, a double-down after the costly acquisitions of Deron Williams and Joe Johnson.

Only Brook Lopez and Johnson remain from the retroactively ominous Sports Illustrated cover. I say ominous because the worst for Brooklyn is yet to come. The Nets could win the lottery three years in a row and they couldn’t draft a top selection.

Without its first round pick next June, Brooklyn has an incentive to win now, but what does that mean? How much winning can the Nets do in 2015-’16? The Nets are starting Jarrett Jack and Bojan Bogdanovic next season — the worst backcourt in basketball.

Behind the always venerable Lopez is Andrea Bargnani, and the Nets have first or second year players backing up at every other position.

Furthermore, at what point is it more advantageous for Brooklyn to value frugal spending over chasing the backside of the playoff picture? Yes, it’s embarrassing to hand-deliver a lottery pick to another team, but what’s done is done.

Is it not worse to compound the problem by reaching deep into your wallet to fund a meandering tortoise? There’s no easy solution to the problems Brooklyn has made for itself, but moving forward without a plan is no longer an option for this delusional franchise. 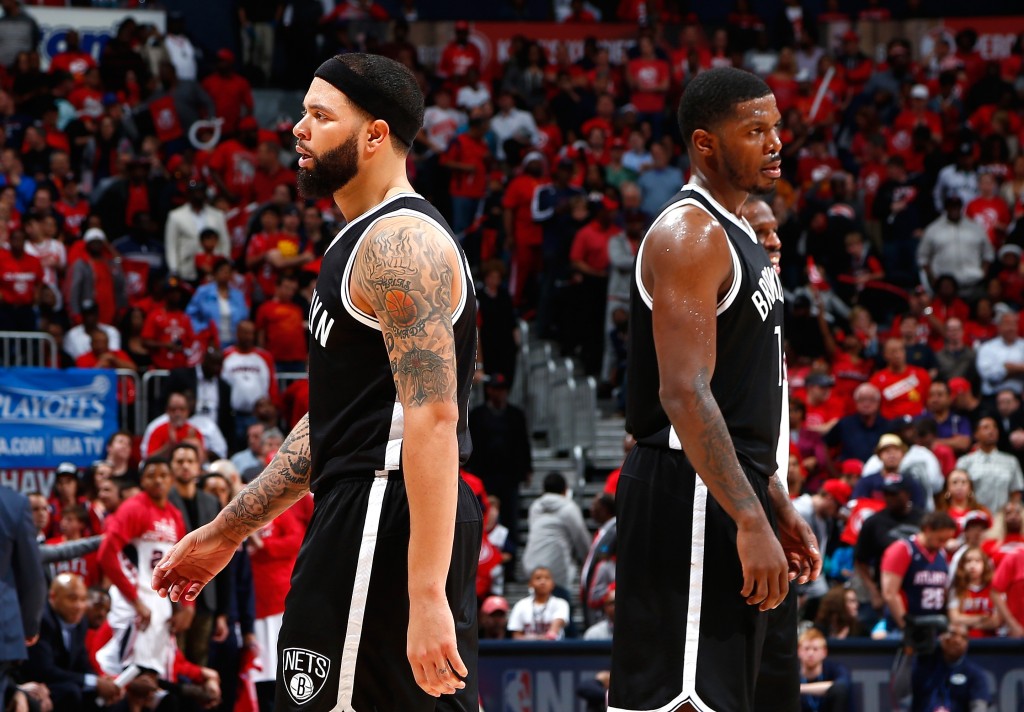 Trading Deron Williams to Dallas was a great first start on building a better tomorrow in Brooklyn — in the short- and long-term. It has been reported Johnson was over playing alongside the ever-moody Williams. With Williams out, Johnson can assume lead play-making duties, which should help fix the team’s aforementioned weakness at guard.

Lopez, Johnson and Thaddeus Young are a decent offensive frontcourt in the East. Young shot 38 percent from 3 in 28 games with the Nets, and perimeter looks will present themselves so long as Lopez and Johnson are healthy and playing like top options.

Brooklyn was a below-average rebounding team last year, and its dearth of established frontcourt experience off the bench shouldn’t inspire much confidence. Adding Thomas Robinson (1 year, $1m) and Rondae Hollis-Jefferson (No. 23 pick) were nice long-term moves, however, as both forwards could outperform their cost. Same goes for point guard Shane Larkin (1 year, $1.5m), only 22, who should see big minutes behind Jack.

Buying out Williams was the first step in admitting the moves in 2012 and 2013 failed. Brooklyn is probably worse in 2015-’16 without Williams, but it wasn’t winning a championship anytime soon either. Meanwhile, overcoming their debts in the years to come has already set the Nets back for years.

Above trying to “win now” to spite Atlanta and Boston, the Nets owe it to themselves to plan ahead. If somebody offers a first round pick for Joe Johnson, jump on it. Same goes for Brook Lopez. Acquiring future assets, whether Brooklyn likes it or not, is the quickest way out of the gutter.

I really enjoyed the Nets’ small moves this summer because they were affordable ways to add young talent while bypassing the draft. If Atlanta gets a late-lottery pick or better from Brooklyn, it doesn’t change Brooklyn’s condition. They need to assess if the playoffs are even possible early in 2015-’16, and if it isn’t — and I suspect it won’t be — the Nets must be proactive for the future.