We could see the changes coming from a mile away. When the Pistons acquired Ersan Ilyasova in June ahead of Greg Monroe’s looming free agency, it spoke volumes as to where the franchise had been and where it was going — thankfully, Pistons fans might add — under Stan Van Gundy.

Detroit has worked hard to add shooting and defense wherever and however possible under Van Gundy. The franchise paid a steep price to excommunicate Josh Smith, badly playing out of position on the wing, and respectfully declined to retain a Monroe/Andre Drummond frontcourt that was Swiss cheese defensively and mostly stagnant offensively. After the All-Star break, lineups built around Monroe/Drummond were outscored by 7.7 points per 100 possessions.

It took Van Gundy his entire first year to literally clear the lane for Drummond to become the face of the franchise. Drummond is a mountain of a young man (he’s 22) coming off a 13-13-2 season. He possesses worlds of potential on the defensive end — although, to be clear, he’s been inadequate over his first three seasons — and Drummond in time should become an evolutionary Tyson Chandler on offense: a masterful diver who finishes everything at the rim, but who can occasionally shake-em-and-break-em on the block.

Drummond and Dwight Howard are different players, of course, but for the sake of not splitting hairs, Van Gundy is rebuilding Detroit in a similar fashion to his Orlando Magic days. He’s brought in Ilyasova (career 37 percent) and Marcus Morris (36 percent), a pair of tall, rangy perimeter shooters. No. 8 overall pick Stanley Johnson is a thick-bodied wing with proven defensive skills and a competent jumper. Jodie Meeks and Anthony Tolliver return as the team’s best shooters from a season ago.

Kentavious Caldwell-Pope, only 22, is in a make-or-break season with Detroit. His size and athleticism make him a candidate for starter’s minutes at the 2. However, Pope shot 40 percent from the field last season, and left plenty of room to be desired on the offensive end. Ideally, the Pistons could play Johnson and Pope together in spurts, considering both project as good NBA defenders. Until Pope fixes his jumper, however, Van Gundy will likely opt to stagger Pope with another shooting wing. 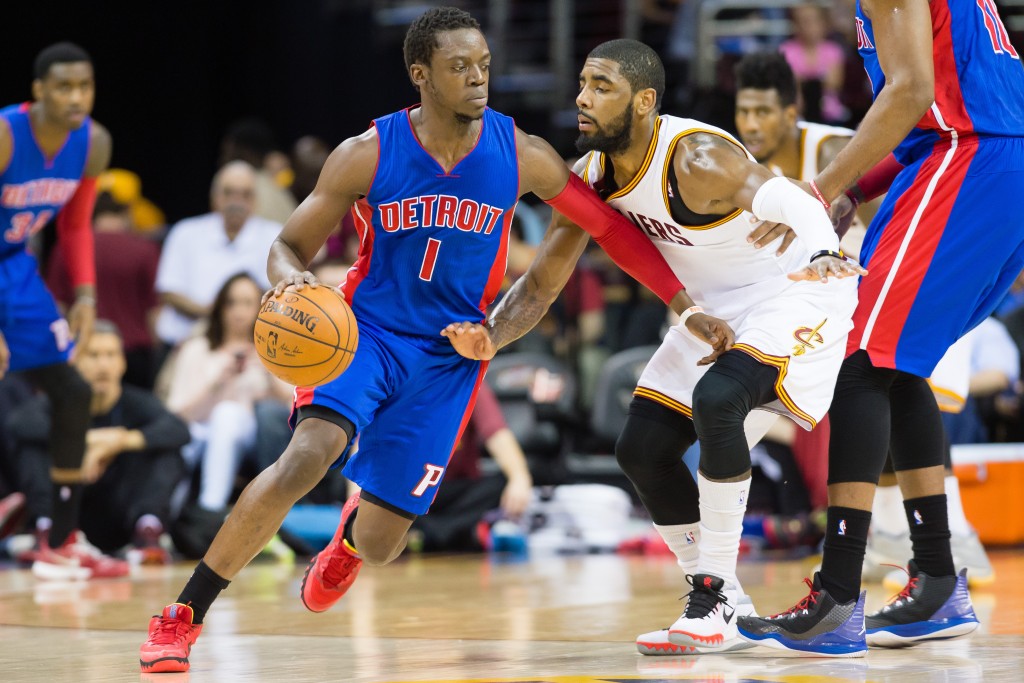 Detroit added Steve Blake to a point guard rotation that includes Brandon Jennings and Reggie Jackson. While having “too much ball-handling” is a non-issue for Detroit after years and years of uninspired offensive groups, where the backcourt minutes end up will be a tricky dance for Van Gundy.

Detroit just gave Jackson a 5-year, $80 million contract — the same amount of money that Washington pays John Wall, if you didn’t know. Jackson averaged 17.6 points and 9.2 assists for the Pistons over 27 starts following a mid-season trade with the Thunder, but Detroit went 10-17 over that stretch.

How much of that losing falls on Jackson is unclear and perhaps unimportant. Jackson and Drummond posted a 109.5 offensive rating, per NBA.com, over those 27 games. The rest of the roster has been severely turned over, and while none of the Pistons’ defensive lineups performed great, with better offense, one would think, comes better team performance.

Jackson is a below-average perimeter shooter over four seasons. He displayed awesome point guard skills in his audition for the starting role, assisting on 46 percent of his teammate’s field goals and posting a 2.61 assist-to-turnover ratio. Until Jackson improves as a shooter, however, there will be a ceiling as to how efficiently he can run the ship. And at $16 million per season, even with the rising cap, there’s a feeling Detroit overpaid for a player who will max out as a Top 15 player at his position.

Brandon Jennings could get some burn as a combo guard off the bench — imagine Lou Williams in Toronto the past couple seasons. Jennings is on an expiring $8 million deal, and some contender could make a move on him once he establishes a clean bill of health. Jennings was playing the most complete basketball of his career before tearing his Achilles mid-season. Signing Blake was a strong anticipation move from Van Gundy — he can backup Jackson and/or play alongside Jennings in reserve lineups, clearing the way for Jennings to play the 2.

It’s hard to pinpoint what the best-case scenario is for Detroit. The Eastern Conference is wide open behind Cleveland, and however starry-eyed a jump from 32 wins to the postseason may be, Van Gundy has a more conducive roster to his vision as coach. Drummond should be a All-Star lock in today’s East, and surrounding him with Jackson and shooters is a sure-fire way to get him there. The Pistons are not gifted on the defensive end, but an uptick in scoring and the unleashing of a beast at center could net them 8-10 more wins.