The list of NBA MVP winners paints the picture of the evolution of the sport. Lew Alcindor becomes Kareem Abdul-Jabbar — he dominates the 1970s, winning six MVP trophies in 10 seasons, bookending the awards with his first two NBA championships.

Larry Bird wins three MVPs in a row. Magic Johnson passes him in championship rings in 1987, and proceeds to match his MVP trophies by 1990. Then Michael Jordan became Michael Jordan: between ’84 and ’92, only Bird, Johnson and Jordan won the MVP award.

So who will make history in 2015-’16? Today, we look at the returning favorites to win the award, Stephen Curry and James Harden. Tomorrow, we look at the best of the other candidates. 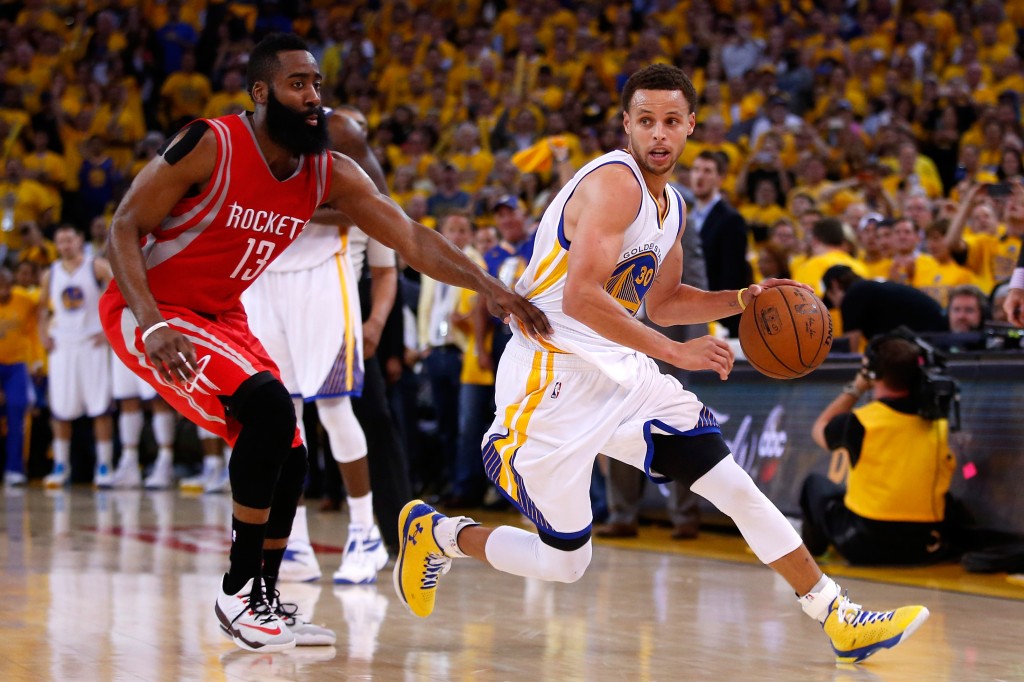 The Warriors won 67 games and the Western Conference, and defeated the Cavaliers in six games to win the NBA championship.

Why He Wins: Curry will win if the Warriors blitzkrieg the NBA again. Yes, Golden State has an excellent supporting cast and sports the best defense in the league. But the “Curry has more help than Harden” narrative overlooked the unprecedented workload Curry carries as the point guard of the NBA’s fastest offense. Defenses make adjustments for great players, but they have to scrap their entire gameplan to prepare for Curry, a player who tilts the floor from the moment he crosses mid-court.

Why He Won’t: Every MVP winner faces the issue of voter’s fatigue: it’s always sexier to vote for somebody else. If the Rockets challenge the Warriors for the top record in the West again, Harden will get real burn for the award. That argument can be extended to past winners like LeBron and Kevin Durant, who are square in the prime of their careers and playing for title contenders. And what’s more appealing than voting for Anthony Davis, the next great superstar, if he duplicates his outrageous numbers from his age-21 season? Curry has significant competition.

There’s also this: Golden State has far less to prove this time around in the regular season. Curry will be afforded extra rest down the stretch of the season as Golden State defends its title. Less minutes and games for Curry means less of a resume.

The Rockets overcame injuries to Dwight Howard and across the board to finish No. 2 in the West. Harden’s unrivaled ability to challenge defenses and get to the foul line championed an overachieving Rockets team into the Final Four.

Houston was much more competitive against Golden State in the conference finals than a five-game series signifies on the surface. A return to the West Finals — and beyond — for Houston is in play because of Harden’s all-encompassing offensive game.

Why He Wins: Houston will be gunning for the top seed in the West, and Harden needs no extra motivation to push for the scoring title. Russell Westbrook snatched the latter from him in the closing months of the season, and Golden State’s enormous homecourt advantage made it next to impossible for anyone to beat them in a 7-game series.

If Harden can earn an uptick in counting stats — a 30-point season would go a long way — while also leading one of the best two-way regular season teams to a top seed, I’m not sure he’ll be beat for the award.

Why He Won’t: I’m not sure Houston is that much better, even with Ty Lawson. Gone are Josh Smith and Pablo Prigioni, two reserves who formed one of the strongest bench units in the league a year ago. With less depth in the backcourt, Houston will be relying an awful lot on Patrick Beverly (frequently banged up) and Lawson (a whole lot of question marks) to log big minutes around Harden.

If one or both of those guys misses time, Houston could be in trouble, and that’s before addressing the future of Howard. Houston earned the right to be in the conversation for upper-echelon teams in the West, but there are plenty of variables to consider with this team. An up-and-down campaign is no good for Harden’s MVP chances.