DeMarcus Cousins and the Sacramento Kings have been through a lot. Through five seasons, Boogie Cousins has validated the No. 5 pick the Kings used on him and then some. He averaged 24 and 12 last season and made his first All-Star team. During the sunnier days in the early year, he even displayed deft ability on the defensive end.

The Kings were 23-36 with Cousins in 2014-’15, a record that speaks to the disarray of the franchise following the scrutinized firing of Mike Malone. As George Karl and Vlade Divac adjusted in their new seats of power, Kings owner Vivek Ranadivé grew frustrated with the public pissing match taking place between his team’s coach, front office and franchise player.

Ranadivé reportedly blocked deals for Cousins, making him unavailable — Karl was going to coach Cousins or not at all. While there’s an argument to be made trading Cousins for a bounty of picks and young assets could jump start “the next great Kings team,” Cousins is a Top 10 player, and dealing one of those is almost universally a bad idea. Cousins is under team control for the next three seasons, his salary jumping from $15.8m to $16.8m to $18m — an absolute coup for the Kings.

In a league embracing small lineups and positional ambiguity, building around Cousins, particularly at his price, is a head start toward building a contender. There’s a shortage of capable bigs who can check Cousins on one end and draw him outside the paint on the other. Anthony Davis comes to mind, but he’s the exception to everything, and there’s only a handful of guys outside Davis and Draymond Green who even come to mind. Cousins is a problem for defenses, an outlier in a league with fewer and fewer truly dominate post-ups scorers, let alone someone with his burst and athleticism.

Over the past five seasons, amidst constant rumors the franchise was relocating, the Kings have made it look pretty damn difficult to build around their cornerstone. This summer marked the first aggressive push Sacramento has made to get Boogie help, and to their credit the Kings are more talented on paper.

Cousins and Rudy Gay return as the team’s top two players. Gay would be an interesting stretch-4 candidate next to Boogie — the type of player Sacramento has failed to bring into the fold before — but Divac has instead opted to go big.

Divas signed big men Kostas Koufos (4-years, $33 million) and Quincy Acy and drafted 7-footer Willie Cauley-Stein with the No. 6 pick. He allocated the rest of the team’s funds to shooting (Marco Belinelli, Omri Casspi) and guard play (Rajon Rondo, Seth Curry). Starting Cousins and Cauley-Stein/Koufos provides setbacks on offense, but has the makings of a tough defensive front, and the rookie is spry enough to chase forwards around the perimeter.

This is where I should stop and reference the hideous, short-sided move Sacramento made with Philadelphia in order to clear the necessary cap space to add, umm, Rondo and Belinelli? The ramifications of this move, which will fork over juicy draft picks to Sacramento for years to come — in addition to parting ways with Nik Stauskas one year after drafting him in the lottery — could very well shackle the Kings for the foreseeable future.

As for now, though, the Kings accomplished what they wanted — they are better this season. And, for the first time in a long while, the Western Conference is taking applicants for the a playoff spot! The Mavericks are falling further and further by the day and the Blazers are no longer the veteran-laden bunch of the past few years. The Kings will square off against the Jazz, the Suns and whoever else hangs around for the No. 8 seed. A healthy Cousins gives Sacramento an edge over those other teams, and Cousins is now equipped, theoretically, with enough talent to lead Sacramento to a winning season. 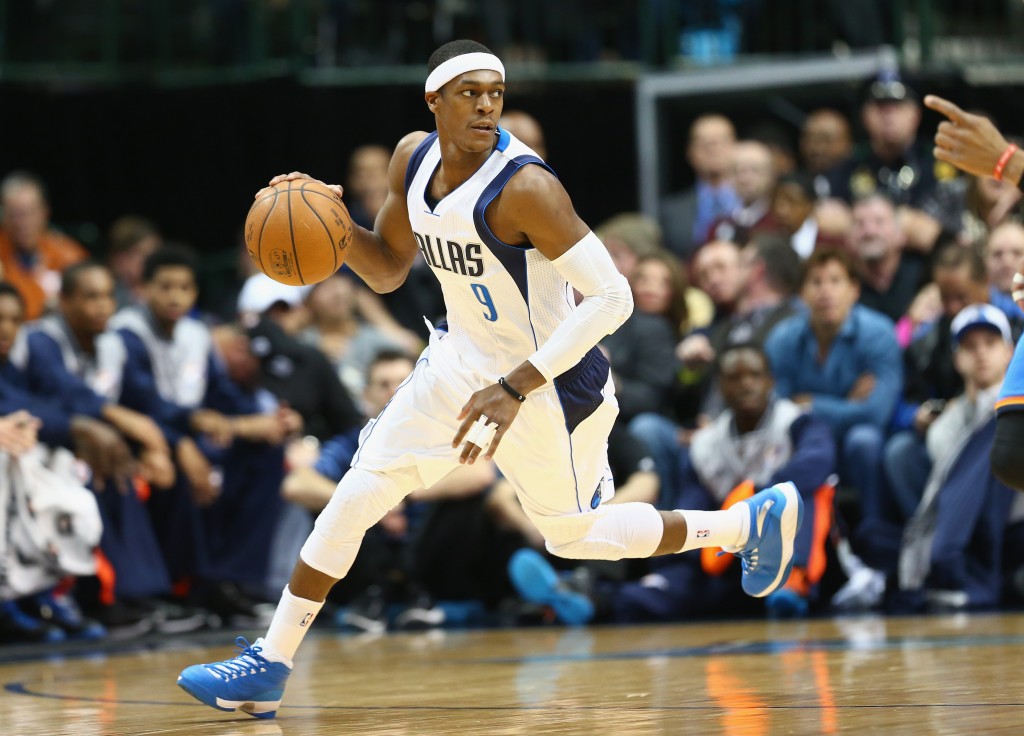 Ideally, Cousins would be surrounded by multiple deep threats at all times. Ben McLemore was much improved on 3s in year two (35.8 percent), and the former No. 7 pick has enough talent to suggest continued improvement with continuity. Adding Belinelli on the wing gives Sacramento a badly needed spot-up threat, and he and Casspi can juice up an otherwise dry second-unit.

A three-man frontcourt of Cousins, Cauley-Stein and Koufos, however, presents unavoidable spacing issues — and that’s assuming the point guard position is a place of strength shooting the ball. The Kings just added one of the league’s most limited scoring threats in Rondo, a player with a head that seldom fits in the door, and a ring on his finger that gives him power in any locker room.

Rondo should come off the bench, where he could use his revolutionary passing skills to lift second-units, and lean on Belinelli and Casspi to balance the floor. At $9 million this season, it’s unclear if Ranadivé is interested in benching the biggest free agent addition of his early tenure as owner.

Cousins devolved nice chemistry with Darren Collison, who had his best season since he broke out as Chris Paul’s backup in New Orleans. Collison will never move the Earth on defense, but he hit 37 percent of his shots from deep for a consecutive season, and ripped off the best stats line of his career: 16.1 points, 5.6 rebounds, 3.2 assists and 1.5 steals. The Kings outscored opponents by 8.1 points per 100 possessions, per NBA.com, when Cousins and Collison shared the floor — although the two only played 935 minutes together (33 games).

The Kings could make the playoffs for the first time since 2006. They also could fall short. Having hamstrung their future in order to be better right away, let’s hope for the sanity of Sacramento fans that Cousins, Karl and this team take a full step forward.