Long before Atlanta wrapped its hands around the neck of the Eastern Conference, winning 60 games and ascending to the East Finals, the Hawks were just 5-4 and playing without DeMarre Carroll in Quicken Loans Arena.

Cleveland revved its engine and flew past Atlanta, scoring 41 points in the first quarter, and leading 71-43 at halftime. LeBron James scored 32 points in 29 minutes, nailed 4 of 5 3s, and collected seven assists and six rebounds.

The newly acquired Thabo Sefolosha played 21 minutes at small forward for Atlanta before Mike Budenholzer pulled his starters for good in the second half. Kyle Korver failed to score, and the Hawks were -28 with him on the floor.

LeBron James creates problems for his opponents. The genius of his game is forcing the defense to choose first, and making them pay by perfectly adapting to the change on the board. Aside from the very best individual defenders (prime Shawn Marion, Kawhi Leonard), and the anomaly of facing a historic team defense (2015 NBA Finals), seldom does a team stop LeBron for multiple possessions in a row — let alone an entire game or series.

It is, however, possible to slow down LeBron  — to knock the train of the tracks, so to speak — so long as you have a capable individual defender, and a trained, disciplined team concept surrounding him. In DeMarre Carroll, the Hawks had a 6-8, junkyard dog who could take the brunt of the blow. Atlanta was the seventh-best defense per 100 possessions last season, and Carroll was routinely tasked with guarding the opposition’s best player.

Atlanta won 55 of its remaining 72 games last season, including three victories against Cleveland. They were declared “Spurs East” and were a trendy pick to meet head on with Golden State in a futuristic, perimeter-heavy Finals.

However, the Hawks began to fade down the stretch, not unlike the No. 1 seed Indiana Pacers from 2013-14. Atlanta needed six games each to take down Brooklyn and Washington in the first two rounds of the playoffs.

By the time the Hawks and Cavaliers met in the East Finals, Kevin Love was long gone, and Kyrie Irving, of course, was next, but it mattered little. LeBron averaged 30, 11 and nine, and Cleveland doubled Atlanta’s production on the offensive glass, bull dozing its way to the Finals in four games.

Carroll was technically on the floor, but an apparent knee injury in Game 1 restricted him, and Paul Millsap took over his defensive duties late in games. Carroll averaged seven points on 32.4 percent shooting, and Atlanta’s 3-point machine got turned off by Cleveland’s impromptu hard-nosed playoff identity. 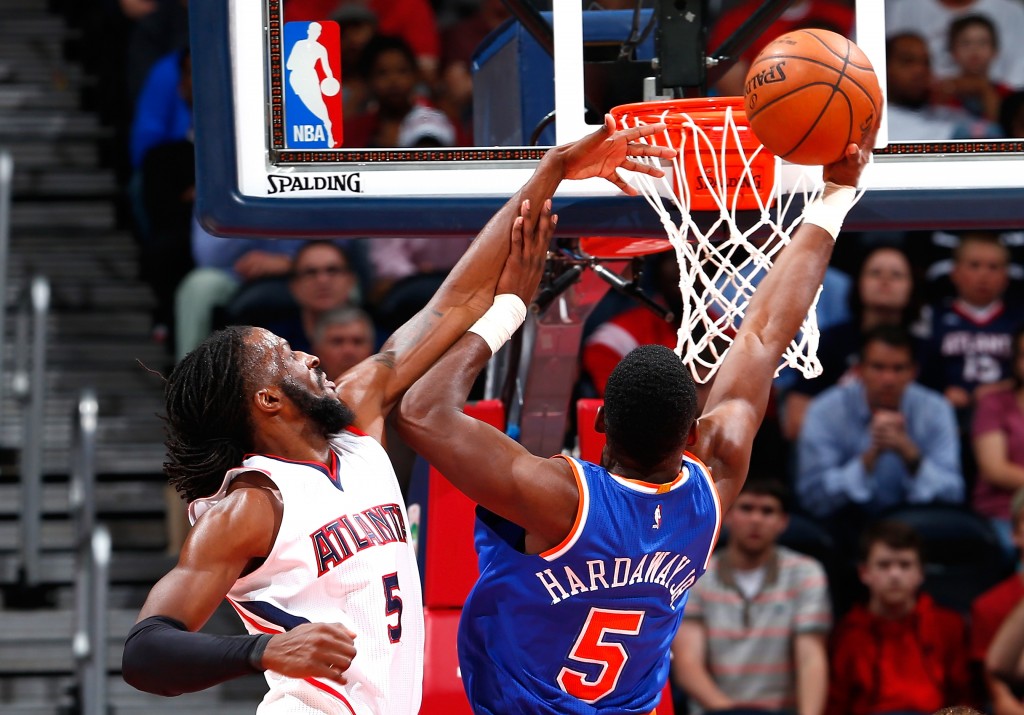 Carroll left Atlanta for big free agent money in Toronto, leaving a gapping hole in the Hawks starting lineup. His absence is more dire than Atlanta losing its fifth scoring option, and more complicated than finding another capable wing defender. Much of the Hawks impressive defensive record last season was built on the continuity of its parts. Out with Carroll goes a 5-man outfit that started nearly 70 games last season, a starting lineup that showed promise before Al Horford went down with a season-ending injury the previous season.

The Hawks were 27th in rebounding by percentage in 2014-15, and were the worst offensive rebounding team in basketball. That was with Carroll, a tall, lengthy wing that rebounded at an acceptable level for the 3 spot.

What happened to Thabo Sefolosha in New York City in the spring continues to be one of the most bizarre, underrated sports headlines in recent memory. As he recovers from a broken right fibula — an injury presumably suffered during an altercation with the NYPD — question marks abound as to whether or not Sefolosha will be available to open the season.

In less than 20 minutes per game, Sefolosha posted a net rating of 10.3 for the Hawks. He’s roughly the same size as Carroll, but during his starting days in Oklahoma City he was a more pedestrian rebounder. It was his dearth of an offensive game, mind you, that got blamed time and time again for the failures of those old Thunder starting lineups.

How much of a down grade is Carroll to Sefolosha? Before his playing days with Atlanta, Carroll was a NBA journeymen, and as locked in as Carroll was last season (in a contract year), Toronto will be asking him to do much more offensively than Atlanta did. It’s possible Carroll to Sefolosha doesn’t hurt all that much, but that’s assuming he’s ready to play starter’s minutes by late-October.

On draft night, Atlanta dealt the No. 19 pick for Tim Hardaway Jr., a confounding move considering how unimpressive Hardaway looked during New York’s disastrous season. The theory has been floated around that Budenholzer was impressed by Hardaway’s 23 point performance in the penultimate game of the season against Atlanta.

A first round pick was an overpay for Hardaway no matter how you slice it. Atlanta is betting high that it’s player development staff can mold Hardaway, still 23, into something — not unlike what it did with Carroll the past two seasons.

It doesn’t take a deep dive into Hardaway’s first 151 games, however, to see he’s a fraction of the defender Atlanta needs on the wing. Hardaway can’t guard LeBron, and neither can Kyle Korver, which means Atlanta would have to task its power forward with LeBron duties whenever these two play together.

It’s possible Atlanta will throw multiple defenders at LeBron during their four Cleveland games this season. Kent Bazemore will be in the mix for a few possessions at a time, and Millsap could certainly get another crack at him in crunch time. How the Hawks answer this question will go a long way to determining if their defense will play them out of the upper tier in the East.