Less than a month now separates us from the start of the 2015-16 NBA regular season. While the Cleveland Cavaliers are again expected to be the class of the Eastern Conference, there are a number of teams that earned lottery picks a season ago, looking to be playing basketball in May. Here’s a look at which seven teams that missed the playoffs in the East last season are most likely to be in that field this year:

Despite having superstar Paul George miss 76 games a year ago, the Pacers finished just one game short of the final playoff spot in the Eastern Conference. This year, George will have a legitimate No. 2 scorer by his side in Monta Ellis. The team also made an emphasis to become more athletic in the frontcourt by replacing David West and Roy Hibbert with Jordan Hill and Lavoy Allen while drafting former Texas standout Myles Turner.

The Miami Heat have a roster that would indicate it should be among the best teams in the East, but Miami woefully underachieved a season ago. Forwards Chris Bosh and Luol Deng did miss significant time, but if they can stay healthy, the Heat could have one of the conference’s best starting fives. Re-signing Goran Dragic will bring stability to the other guard position next to Dwyane Wade. Center Hassan Whiteside came on strong last year and the addition of swingman Gerald Green could do wonders for the team’s depth. 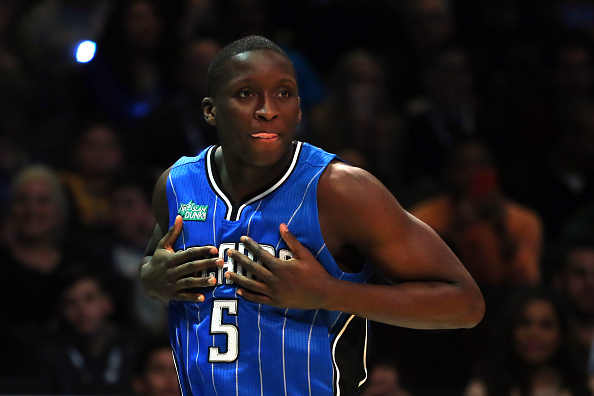 NEW YORK, NY – FEBRUARY 14: Victor Oladipo #5 of the Orlando Magic reacts during the Sprite Slam Dunk Contest as part of the 2015 NBA Allstar Weekend at Barclays Center on February 14, 2015 in the Brooklyn borough of New York City. NOTE TO USER: User expressly acknowledges and agrees that, by downloading and or using this photograph, User is consenting to the terms and conditions of the Getty Images License Agreement. (Photo by Elsa/Getty Images)

New head coach Scott Skiles will be looking to turn around a team that hasn’t won more than 25 games in any of the last three seasons, but the talent for Orlando is pretty good. The re-signing of forward Tobias Harris keeps a strong, young nucleus in place that includes center Nikola Vuecvic and guards Victor Oladipo and Elfrid Payton. The selection of Mario Hezonja and signing of C.J. Watson should help the Magic stretch the floor.

The loss of Greg Monroe may have been the biggest headline surrounding the Pistons this offseason, but the personnel on the roster may be the best fit for head coach Stan Van Gundy’s system since he came to Detroit. The Pistons have a deep backcourt with Reggie Jackson, Brandon Jennings, Steve Blake, Jodie Meeks and Kentavious Caldwell-Pope. Ersan Ilyasova can stretch the floor from his power forward position while center Andre Drummond remains one of the league’s most underrated big men. Rookie Stanley Johnson should be able to contribute right away, but Detroit still lacks a go-to scorer. 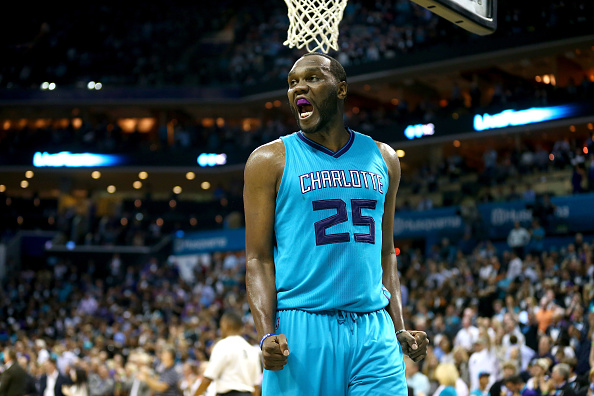 CHARLOTTE, NC – OCTOBER 29: Al Jefferson #25 of the Charlotte Hornets reacts after a play during their game against the Milwaukee Bucks at Time Warner Cable Arena on October 29, 2014 in Charlotte, North Carolina. The Charlotte Hornets defeated the Milwaukee Bucks 108-106 in overtime. NOTE TO USER: User expressly acknowledges and agrees that, by downloading and or using this photograph, User is consenting to the terms and conditions of the Getty Images License Agreement. (Photo by Streeter Lecka/Getty Images)

It’s safe to say that there’s at least a handful of fans in Charlotte that aren’t sad to see guard Lance Stephenson go, but finding scoring outside of guard Kemba Walker and center Al Jefferson may be difficult. Centers Spencer Hawes and rookie Frank Kaminsky are each capable of stretching the floor as is acquisition Nicolas Batum, but Charlotte still had a less than stellar offseason and could take a step back.

Having forward Carmelo Anthony healthy will be key for the New York Knicks, but reaching the postseason is still a long shot. The additions of center Robin Lopez and guard Arron Afflalo are certainly upgrades for New York, but how NBA-ready sharp-shooting rookie and Latvian big man Kristaps Porzingis is remains to be seen. The point guard position is also a major mystery at this point.

There is reason for optimism in the City of Brotherly Love, but most of that optimism is in regard to the future. Third overall pick Jahlil Okafor, Joel Embiid and Nerlens Noel give Philadelphia three pillars to build around inside. Guard Tony Wroten showed the potential to be a solid scorer at the NBA level in 30 games last season.

Mike Ferguson is a Bloguin contributor, the editor of Noled Out and a lifetime Florida State sports enthusiast. Mike vividly remembers watching Warrick Dunn run down the sideline in Gainesville in 1993, the "Choke at Doak" in 1994 and Monte Cummings' driving layup to beat #1 Duke in 2002. Mike has worked as a sports reporter in both print and online. For isportsweb in 2013, Mike gave press coverage of Florida State football's run to the 2013 national championship. Mike has been featured on SI.com, FoxSports.com and Yahoo Sports while interviewing major sports stars such as 2013 National League MVP Andrew McCutchen. Mike graduated from Florida State University in 2009 with a major in Religion and a minor in Communications. Mike currently resides in Haines City, Florida with his wife Jennifer and daughters Trinity and Greenly. Mike is a full-time reporter at Polk County's newspaper, The Ledger, in Lakeland, Florida. Mike can be followed on Twitter @MikeWFerguson.