Quick: Who was the shooting guard on the 1960s Boston Celtics? The 1960s Los Angeles Lakers? The 1980s Philadelphia 76ers? The 1980s Boston Celtics? Without Google searching, the answers are either names that evade all but the most devoted fans and students of the game’s history, or those positions experienced a certain degree of flux from one season to the next.

Even in more recent days, who was the starting shooting guard for the 2007 champion San Antonio Spurs in a majority of the 82-game regular season? That last question is a trick question… because no shooting guard started 42 or more games for that team, the last of the “every-other-year” Spurs teams that gave the franchise its four-titles-in-nine-seasons run.

This, as much as anything else, is why Dwyane Wade can legitimately claim to be a top-5 shooting guard in NBA history.

With that prelude over, we turn to the focus of this piece, which is not so much Wade’s NBA legacy as his complicated personality and interior life. Few athletes in modern American sports more profoundly reveal the disconnect between on-court and off-court lives than Wade does… and has.

Think about the heavy lifting Wade has had to do in his career — not as a scorer or defender, but as the bridge between LeBron James and Erik Spoelstra. Think about the fact that Wade, once coached by Pat Riley, then accepted coaching from Spoelstra and held the Heat locker room together over many seasons, enabling Miami to pull off the rare feat of making four straight NBA Finals. (It very likely would have been five if LeBron had stayed.)

It takes a complicated person to live this existence, to be cutthroat — often to the point of excess — and yet also a peacemaker and a good citizen.

Here is a photo essay on a complicated man, Dwyane Wade. One person, many realities:

This is Dwyane Wade: 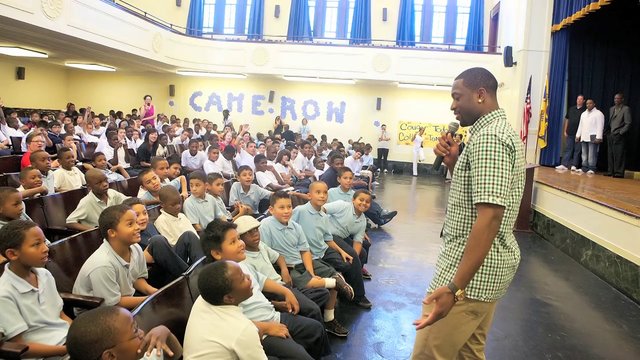 This is Dwyane Wade, too: 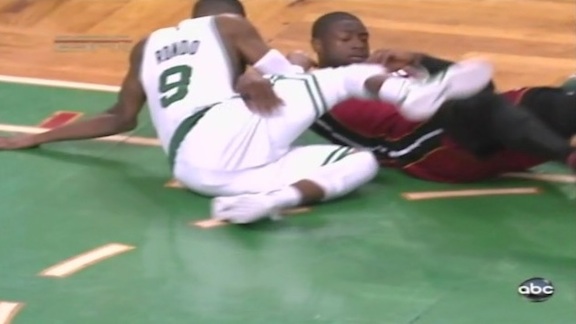 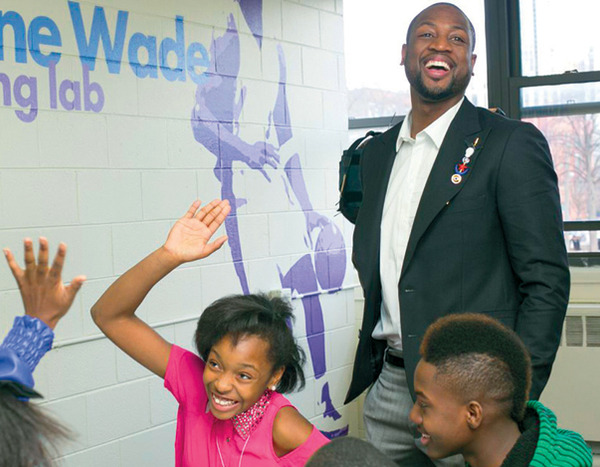 Not an impostor in this image: 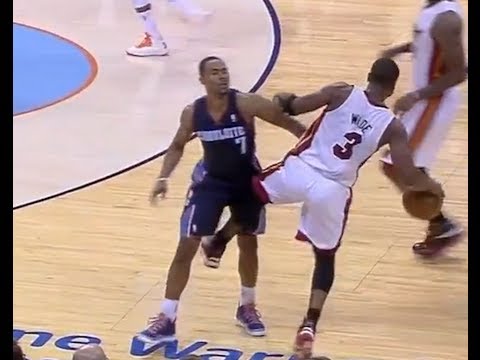 He’s engaged with others here: 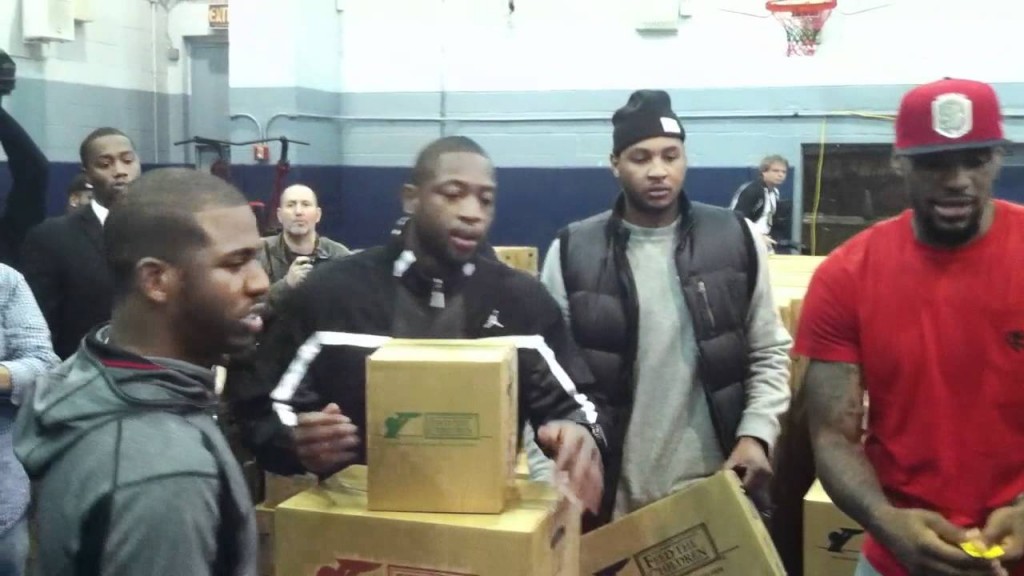 He’s just as engaged with another person here: 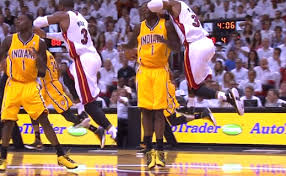 A moment with Spoelstra here: 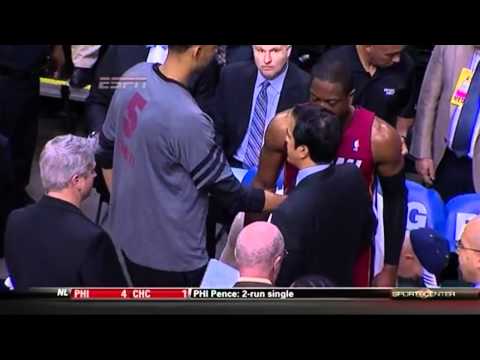 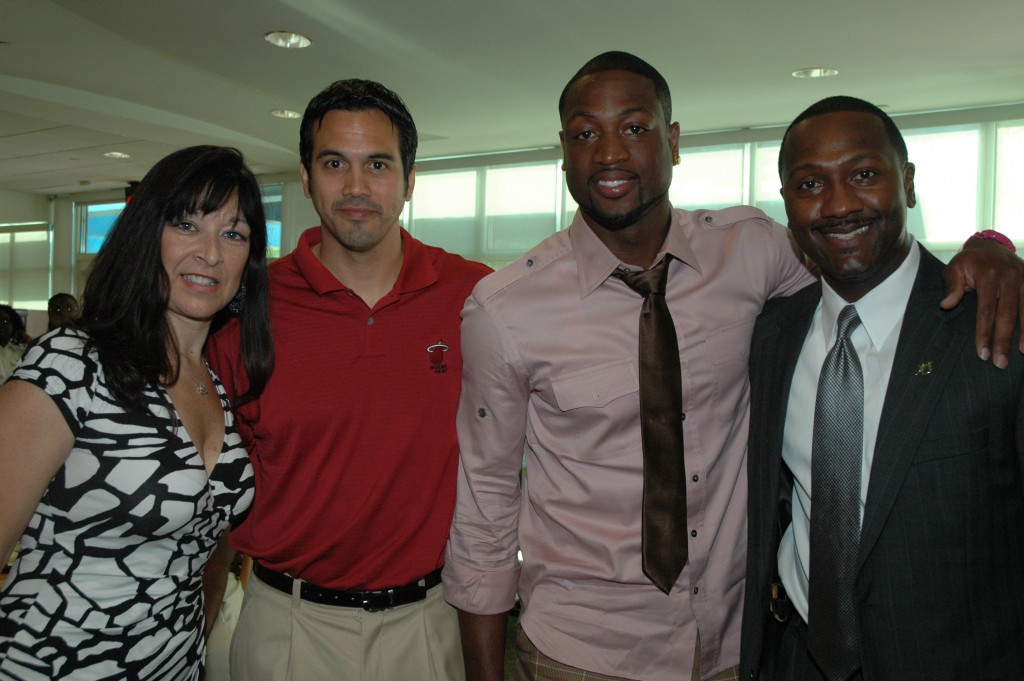 Dwyane Wade has reached out to communities in need — in Miami, but also in his native Midwest (both Chicago and where he attended college in Milwaukee, at Marquette University) and abroad, in Haiti.

He has also been the author of several vicious acts on court, the kind of actions that have led to worse sanctions for other athletes who have done the same or similar things.

Wade displays a superstar’s level of entitlement after a great many calls and gets highly unnerved enough times to notice. Yet, he was also the calming presence for the 2011 and 2012 Heat, guiding LeBron through many storms and on to his first title. From there, LeBron became more the central figure on the Heat, but Wade had to show him the way first.

Wade is introspective and genuinely mindful of how fortunate he is to be where he is. Yet, he has lived an often tumultuous life which cuts against the mellow and polished exterior he projects.

One should not make a habit of judging a book by its cover. One should be even less inclined to make easy snap judgments about Dwyane Wade.