Crossover Chronicles writer Joe Manganiello has joined me in examining and ranking the five best single-season teams in NBA history. The New York Knicks certainly enjoyed their best run as a franchise from 1970 through 1973, and the Boston Celtics won two titles in 1974 and 1976, but from the decade, only two seasons — from the very start to the very end — were complete masterpieces: the 1971 Milwaukee Bucks and, more prominently, the 1972 Los Angeles Lakers.

The ’71 Bucks went 66-16 and cruised to the title, going 12-2 in the playoffs. The ’72 Lakers went 69-13, winning 33 straight games at one point (still a record), and compiled a 12-3 playoff record. Neither team was taken to a Game 7 in the postseason. Neither team lost as many as 20 total games, encompassing the regular season and the playoffs combined. Those are truly great seasons, with the Lakers’ season eclipsing the Bucks’ campaign not just because of the 33 straight wins, but because Los Angeles played the New York Knicks in the 1972 NBA Finals, whereas the Bucks played the 42-40 Baltimore Bullets in the 1971 Finals. Los Angeles also had to face a 63-win Bucks team in the 1972 Western Conference Finals. The ’71 Bucks played a weary, injury-plagued, 48-win Laker team in that year’s West finals series.

The lack of great NBA seasons in the 1970s — campaigns that were dominant both in a 1-through-82 context and in the postseason — shows that the league was going through a second set of growing pains.

For much of the 1950s, the NBA had eight teams, four in each division. The amount of talent in the league wasn’t widely distributed, and the sport of professional basketball was just trying to find itself. On multiple occasions — such as 1957 (St. Louis Hawks) and 1959 (Minneapolis Lakers) — losing teams from the Western Division made the NBA Finals.

The sport plainly struggled for much of the 1950s, but the advent of the 24-second shot clock in the 1954-’55 season updated the game and lent it the crowd-pleasing form it retains today. Professional basketball was just learning how to walk in the 1950s. Assigning great weight to seasons back then seems unnecessary, a manifestation of analytical overreach in the attempt to capture the history of various franchises.

In the fall of 1970, the NBA began a more modern era, stepping into a decade that would end — in the fall of 1979 — with the adoption of another important modernizing idea, the three-point line. In the 1970-’71 season, the NBA — which had been a 14-team league the season before — expanded to 17 teams. What this move did was obliterate the two-division structure and give rise to a four-division structure. What had been the Eastern and Western Divisions became the Eastern and Western Conferences.

Professional basketball could also be found in the ABA during the 1970s, and since the ABA tried so clearly to differentiate itself from the NBA on a number of levels, it can safely be said that the sport — in its professional incarnations — was trying to figure itself out this decade, before the stabilizing forces of the 1980s and the commercially salvific arrivals of Magic Johnson and Larry Bird.

It’s only fitting, then, that in a decade which involved a long sorting-out process, the results of each season reflected the very same dynamic at work.

If most of the great single-team seasons in NBA history were found outside the 1970s — with only the ’72 Lakers making the cut in just about anyone’s top five — many of the “best mediocre seasons” in league history were also found in the decade. A relatively quick survey of the decade reveals some absurdities for a number of teams and coaches, including a trio of head coaches who roamed NBA sidelines in that capacity for over 15 years. 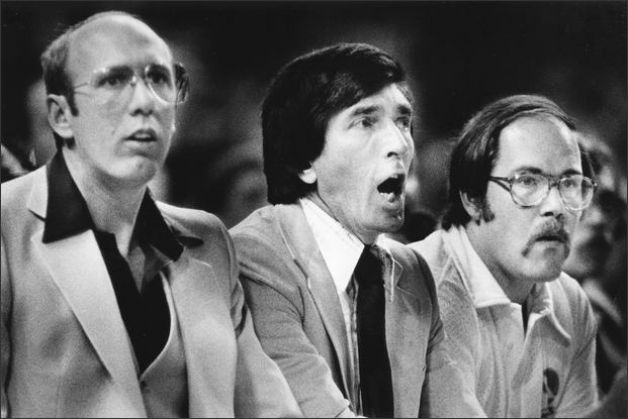 At the end of the 1970s, Gene Shue (above, with longtime NBA assistant and future head coach Bob Weiss, left) coached the San Diego Clippers. Earlier in the decade, he experienced the opposite sides of winning and losing at a time when the NBA was in search of itself.

Gene Shue coached for just over 20 years in the NBA. In 1977, he coached the Philadelphia 76ers to 50 wins, but Julius Erving and other talented individual stars were outmaneuvered by the Portland Trail Blazers and their constant movement in the NBA Finals, making the season feel like a failure. In 1973, Shue coached the Baltimore Bullets to 52 wins, but the last of the great Red Holzman New York Knicks teams — with 57 wins — was waiting in the conference semifinals. The Bullets went home early.

Shue’s redemptive season came in 1971, at the beginning of the conference era. The Baltimore Bullets knocked off the defending champion New York Knicks in a seven-game Eastern Conference Finals to make the first NBA Finals appearance in franchise history. The Bullets’ record? 42-40. The season which felt the most like a successful one was the season that didn’t go very smoothly at all in a 1-through-82 context.

That pattern repeated itself in the 1970s for other coaches — with the Bullets, but also in the opposite corner of the country. 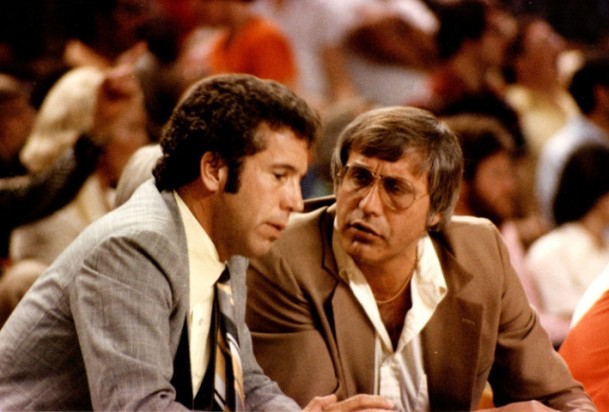 Longtime Phoenix Suns coach John MacLeod, left, consults with his trusted assistant, Al Bianchi.
What happened to MacLeod in his career is not very different from what happened to two other veteran NBA coaches, Gene Shue and Dick Motta.

In Phoenix, John MacLeod built great teams. The Suns won 50 or more games four times, 53 or more on three occasions. In two of those years, they reached the conference finals but could not break through. In the other two instances, the Suns couldn’t get out of the conference semifinals. MacLeod, when he relocated in Dallas with the Mavericks in time for the 1987-’88 season, guided a bunch of veterans to Game 7 of the Western Conference Finals. However, that game was in the fabulous Forum, and the repeat-minded Los Angeles Lakers were not about to be denied. MacLeod, for the second time, coached a team within one win of a Finals appearance, only to fall short. (Phoenix in 1979 marked the other occasion.)

However, MacLeod did make the Finals once. In 1976, his Phoenix team took down defending champion Golden State in the West finals. The Warriors had a 59-23 record in the regular season. Phoenix’s record? The same as the ’71 Baltimore Bullets under Gene Shue: 42-40.

Who needs brilliant seasons when you can upset your way to the Finals? Such was the NBA for a lot of the 1970s.

MacLeod’s Dallas team in 1988 was mostly comprised of players who had developed under a previous coach, the first in Mavericks history. That coach was Dick Motta, who appears above in the cover photo for this story. Of all the “bad” seasons in the 1970s NBA, Motta’s rose to a greater height than what Shue (1971) and MacLeod (1976) were able to attain.

However, in 1978, Motta’s 44-win Washington team knocked off Billy Cunningham’s 55-win Philadelphia 76ers in the Eastern Conference Finals. (Just six games into the 1977-’78 season, Cunningham replaced Shue, who was kicked to the curb.) With the best team in the league during the regular season — Portland — out of the playoffs due to an injury to superstar Bill Walton, the Bullets drew a lower-seeded Seattle SuperSonics team in the NBA Finals. Wes Unseld, Elvin Hayes, and the rest of a veteran cast prevailed.

It was and is silly. It’s an inversion of how we think seasons are supposed to progress. Yet, a team that was relatively ordinary — not far removed from the .500 mark — during the regular season came alive in spring and won the Bullets’ first NBA title… the one Shue couldn’t win in 1971 or other points in the Baltimore era of the franchise. (Shue later coached the Bullets again in Washington, in the 1980s, but he got no further than the East semis.)

The NBA, over a longer period of time, has produced several transcendent seasons — the 1986 Celtics, the 1996 Bulls, the 1983 Sixers, and more — but the league also witnessed seasons that stumbled along through 82 games and then found an unexpected championship at the end of the rainbow.

Not all seasons are created equal, but a championship trophy — even one captured against a backdrop of mediocrity — counts just as much in terms of personal and franchise prestige as another. Making the NBA Finals — as the Phoenix Suns did during the 1970s — gave them one more conference title than the Denver Nuggets and Los Angeles Clippers, among other organizations. In 1993, that total was doubled to two.

Single NBA seasons are literally trips from one city to the next. They’re also trips in that more mind-altered, drug-induced sense as well.