As if Spurs’ Tim Duncan does not have enough accolades to his pro basketball resume, here comes this gem.

Duncan is set to be featured in Marvel’s “The Punisher” comic book as a car mechanic (seeing how he owns “Black Jack Speed Shop” autobody shop in San Antonio) to “Frank Castle” aka “The Punisher.” And how appropriate too considering TD is one huge “Punisher” fan. He wears the logo of the comic character on his knee brace.

Check out TD’s cameo (huge tip of the hat to Project Spurs) where the artist even capture his NBA championship ring. 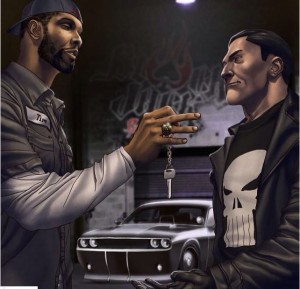