I thought for multiple days how I was going to write this article, and when sitting down to compile a few video clips and links to supplement my writing, the amount of material I came across was so substantial that I was ambushed.

I was ambushed by the realization that I didn’t have to write that much — Hubie Brown, a 180-degree difference from the many failed NBA Finals analysts we mentioned on Friday, could tell his own story. He could express, by himself and in his own words, why he’s the best NBA analyst, even now.

Jeff Van Gundy is terrific, particularly because of his candor. Inside the NBA is still fun, but Chuck and Kenny will go off the reservation once in a while. What would Hubie say about those instances when Mr. Barkley or Mr. Smith say something errant?

“You cannot have that.”

In retrospect, it’s a shame that CBS lost the NBA to NBC, if only because it meant just two years of Hubie Brown calling the NBA Finals in the league’s heyday (in 1989 and 1990). He did call the 2005 Finals between Detroit and San Antonio for ABC, and then the 2006 Finals between Miami and Dallas on the same network, but his broadcasting career deserved far more than just four Finals on television, much as Vin Scully’s career deserved far more than the three World Series he called on television for NBC in the 1980s.

Nevertheless, everything you’ll see, read and hear below does a pretty good job — better than my words, that’s for sure — of giving you a sense of how fertile and alert a basketball mind Hubie Brown had then… and still has now.

No one’s been better at explaining professional basketball to fans over the past 30 years.

Here, now, is the Hubie Brown Collection at Crossover Chronicles:

The 1989 NBA Finals, Game 1, Hubie’s first Finals game on network TV. (Bonus: This was the debut of the souped-up version of CBS’s NBA theme.)

Here’s lovely interview at the start of the 2015 NBA Playoffs in The Oklahoman newspaper. 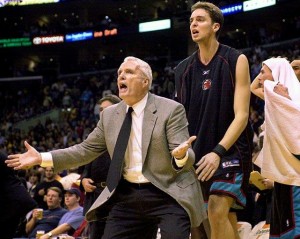 That’s a very, very young Pau Gasol behind an older Hubie Brown with the Memphis Grizzlies. Brown won one more NBA Coach Of The Year Award in his old-man stint with the Griz, reminding us how skilled and knowledgeable a coach he’s always been.

Here’s a piece from Awful Announcing in 2012.

Here’s video from a coaching clinic series — you’ll see more links and videos on the page:

In this next video, Brown holds court with reporters on Michael Jordan and other all-time topics:

His speech upon being inducted into the Basketball Hall of Fame:

The Russian composer Sergei Rachmaninoff said, “Music is enough for a lifetime, but a lifetime is not enough for music.”

Basketball is enough for a lifetime, and Hubie Brown’s lifetime has been more than enough for basketball.