It’s time to take a look back at the 2011 NBA Draft that was sadly lacking in a lot of excitement, movement, and unpredictability at the top of the draft.  Kyrie Irving and Derrick Williams went 1-2 as expected, Enes Kanter went #3 to Utah, and the rest of the pieces fell into place on what seemed like a ho-hum evening in New Jersey.  But, that doesn’t mean we can’t have some fun recapping the NBA Draft with some post-draft awards.  These aren’t your normal awards as we’ll combine some analysis of the picks with thoughts on ESPN’s coverage (I do work primarily at Awful Announcing after all) and the more puzzling and amusing moments of the evening.  Enjoy!

Quote Of The Night – Jan Vesely

-When asked about his comparison with Clippers star Blake Griffin, Vesely said in Drago-like broken English, “I think Blake Griffin is American Jan Vesely.”  He instantly has my Rookie of the Year vote.  He also wins star of the night honors for bringing to the 2011 Draft the latest WAG to blow up the internet.

-Every prospect in this class is flawed, but Biyombo had perhaps the most noticeable.  ESPN’s NBA Draft MVP Fran Fraschilla on the DR Congo draftee going to the Bobcats: “Now, the problem… he cannot score.  You cannot run any plays for him.”  Sounds like he should be an immediate contributor in Charlotte.  Good thing the Cats are putting season tickets on the clearance rack.  Fran also said that Biyombo was “allegedly” 18 years old.  Sadly, nobody made the opportunity to make a dated Danny Almonte joke.

-These teams basically swapped bad players and worse contracts, evidently just for the fun of it.  Beno Udrih and Stephen Jackson went to Milwaukee, Corey Maggette was traded to Charlotte, and John Salmons goes back to the Kings.  Milwaukee and Sacramento also traded the #7 and #10 picks.  Yipes.  There hasn’t been a less influential trade than Brian Cardinal straight up for Darko Milicic.  (That actually happened by the way).  Jackson could maybe help Milwaukee, but that’s it in this trade.

-Guys in the know like John Hollinger and Chad Ford were either a fan of Thompson or knew that he was a dark horse in the running for the #4 pick.  Rumors were flying that the Cavs wanted a third lottery pick to get the triumvirate of Irving, Thompson, and Jonas Valanciunas.  When that didn’t happen, it looks like the Cavs had to choose between the two big men and went with the Texas star.  For months, Thompson was a borderline lottery pick.  Now, he’s a Top 5 pick that rapidly rose up the draft boards in the last week.

-We had Leonard going #6 to Washington in our lottery mock, and it was shocking to see him fall all the way to Indiana at #15, who then sent him packing to San Antonio for George Hill.  Leonard doesn’t have a great offensive game now, but his size, defending, and rebounding are top notch.  It must be a great deal for San Antonio, whose front office is the most trustworthy in the league.  And my God, Leonard has hands the size of Andre the Giant.  Also on the brighter side, Leonard had far away the coolest suit of the evening.

-Knight was thought to be in the running at #3 to Utah, who was in need of a PG (and might have filled it with Colorado’s Alec Burks at #12).  Then another likely destination, the Raptors, passed up a chance at the Kentucky freshman for Jonas Valanciunas.  With Washington and Charlotte not in need of a PG, Knight dropped to #8 and the Pistons.  It couldn’t have gone better for Detroit.  He may not be as flashy as fellow Coach Cal recruits John Wall or Derrick Rose, but Knight has the pedigree and the game to step in right away and lead Detroit’s arduous rebuilding project.

-Before Canadian Tristan Thompson this year, Big Bill Wennington was the highest drafted Canadian born player previously.  16th overall by the Mavericks in 1985.  Who knew?  Too bad I missed those years… I’m just crushed that Jud Buechler didn’t get any free publicity tonight.

-What’s not to love about the hundreds of irreverent, random draft factoids that Stu Scott enlightens us with to help us get to know prospects better.  The absolute winner tonight was Enes Kanter… who apparently wants to be a WWE wrestler when his career is over.  He would fit the classic mold of a large, imposing figure a ceiling of Big John Studd, but I don’t know if he could ever be championship material.  John Calipari would make a great Bobby “the Brain” Heenan type of sleazy manager though.

Steal Of The Draft – Jordan Hamilton to Dallas… and then Portland

-Jordan Hamilton can step right into the rotation of the World Champs at the small forward position… theoretically.  What looked to be a very intriguing possibility ended when Dallas traded Hamilton to Portland as part of a 3 way deal that got them Rudy Fernandez.  He’s just as big of a steal in Portland though as he was in Dallas.  Hamilton has a fairly polished game as a scorer and a rebounder and was the best value of the draft at #26, going 22 picks after his college teammate Tristan Thompson.

-The forced interaction between Stu Scott and Mark Jones is my favorite part of the draft.  The segues before and after interviews are so diabolically cringe-worthy, especially when Jonesy has to find something interesting to throw back to Stu.  (Two years ago it was the efficient street cars in Toronto after Demar DeRozan was drafted.)  However, in a huge upset, Stu Scott wins the award this year.  After Canadian Tristan Thompson was selected and went to interview with Canadian Mark Jones, Scott broke out “O Canada” in a singsongy voice.  Jones’ mic then failed to work.  Priceless.

-Living in Columbus and watching a lot of Big Ten basketball, both of these guys are legit players.  They should have been in my Top 10 hidden gems because both Moore and Johnson will have established NBA careers.  Johnson has a similar face-up and step-out offensive game to one Kevin Garnett, so Boston should be a pretty good place to learn.  Moore has an ability to get his own shot and can take over a game offensively, as he did in Purdue’s victory over a #1 Ohio State team in West Lafayette.  Both players should be a welcome help to Boston’s rotation this year and will fit in with a hard-working, winning team. 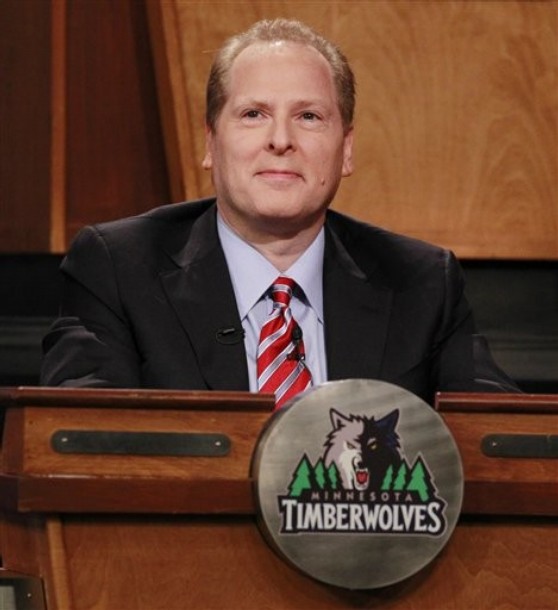 -First, Kahn chooses not to move Derrick Williams and creates a glut of athletic forwards after doing the same at the point guard position.  (I’m guessing he’s going to sign Greg Oden and Michael Olowokandi to pair with Darko Milicic next).  Then, after drafting Donatas Motlejunas later in the first round, Kahn then wanted to delight himself in seeing how many trades he could complete like he was on Minute To Win It.  Maybe Kahn thought by making all these picks for teams, he could keep all the players.  Sorry DK, it doesn’t work that way.  First, it was Donatas and noted Kahn bust Jonny Flynn out the door to Houston for Nikola Mirotic and Brad Miller (maybe he IS starting to stockpile worthless centers).  Then, it was Mirotic out of Minny for the 28th and 43rd pick.  Finally, it was Norris Cole (who Chicago had picked for Minnesota at #28) to the Heat at the top of Round 2 for Bojan Bogdanovic.  If you’re scoring at home, Minnesota acquried Mirotic and traded him, then acquired the pick for Cole and traded him, and finally got Bogdanovic.  Just for good measure, Minnesota also acquired Tanguy Ngombo from the Qatar late in the second round.  Thankfully, the madness stopped there because Kahn either took a nap, or his favorite episode of Dora the Explorer came on.

-Morris could have gone twenty picks before where he went at #41 to the Lakers.  He could have used another year at Michigan, but now he can sit for a year behind Steve Blake and Derek Fisher.  In time though, Morris has the tools to be the future starter at PG for the Lakers.  Terrific value that late in the draft.  The Kings finally getting a PG with the last pick, Isaiah Thomas from Washington, was also sneaky good.

-Jeff Van Gundy on Chukwudiebere: “I’ve never heard of him, I have no idea.  They must like his potential?”  Thanks, Jeff.

-Kyle Singler’s first highlight in his package after being drafted early in the second round by the Pistons?  Diving after a loose ball out of bounds.  Yes, those white players from Duke are the only ones that ever do that.  Somewhere Greg Paulus is unnecessarily diving over people in line for a slurpee at the 7-11.

-The combination of Stu Scott, Jon Barry, Jeff Van Gundy, and Jay Bilas was all wrong.  There was little to no interaction between them the entire evening.  Bilas knows the college guys, but JVG or Barry can’t add anything substantive.  Similarly, when JVG or Barry are talking about an NBA team, Bilas sits on the end of the set like an open Mike Bibby, aware that nobody is passing him the ball.  Finally, Fran Fraschilla has to save all of them on the international prospects.  Is there nobody employed by ESPN that can actually be knowledgeable AND entertaining?

-We thought the Wiz may take Kawhi Leonard at #6, but they ended up getting a very similar player all the way down at #18 with Florida State’s Chris Singleton.  Washington needs help at the defensive end as much as anybody, and Singleton is a nice find that late.  To add to that, the Wiz also got good value at #6 with Jan Vesely, who obviously has the confidence (see above) and game to be a success.  Finally, they picked up Butler’s Shelvin Mack in Round 2.  With those pieces added to a core of John Wall, Javale McGee, and Nick Young, the Wizards look to be building a pretty good nucleus.

-In the end, this 2011 Draft will be all about the Cleveland Cavaliers and how they continue to resurrect a franchise in the A.L. years.  Is the combo of Kyrie Irving and Tristan Thompson better than Derrick Williams and Jan Vesely or Brandon Knight?  Can Kyrie Irving be a top NBA PG like the other top picks of years gone by (Rose, Wall, Paul, Deron Williams)?  The Cavs won’t be winners tomorrow, but Irving and Thompson will be the two players more than any other in this year’s draft that will decide whether or not their franchise can find success… and whether or not the Cavs can truly move on from King James.