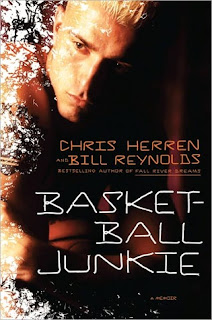 If you read one book this summer read Chris Herren’s.  I picked it up this past weekend and didn’t put it down until there were no pages left to turn.  There may not be a more fitting title ever published, but that doesn’t make this book any less complex.  The story is deep, and layered, centered upon a core of courageously brutal honesty.  To assume it is of one specific genre, or fits neatly into one category, would be a mistake.

In one respect, Basketball Junkie is a gripping story of Herren’s battle with addiction and substance abuse that drags you into the depths of hell right along with him.  The humbly honest and detailed personal account he offers is in some ways frightening.  Never more-so than when he describes the day he overdosed and almost died, while his daughter sat in the backseat with him.

However, at the same time, this book is also a story about love, forgiveness, passion, and the overwhelming power that family can have against even the darkest of demons.  A family with every reason in the world to give up on Chris Herren, but still they never did.

It’s a hoop dreams story too though, as Chris travels along his basketball path from the McDonald’s All American Game as a high school senior from Fall River, to an NBA season with the Boston Celtics.  He talks about his time playing for guys like Jerry Tarkanian, Dan Issel, and Rick Pitino, and alongside players like Nick Van Exel, Chauncey Billups, and Paul Pierce.  He also talks about a game he played as a pro in China once, high on heroin.  A night he set a league record when he scored sixty.

He describes the darkness inside his dramatic rise to prominence, and gut-wrenchingly details his ultimate collapse.  He then talks about what it took to eventually get up and become now a bigger star in life than he ever was on the court.  My words there, not his.  And like I did, you can’t help but end up cheering for the guy now more than ever.  The book is moving, horrific, self-deprecating, sad, and remarkable.  But more than anything else, his road to recovery is nothing sort of inspirational.

To me, this story dares you to believe that it’s never too dark to dream.  It dares everyone.  No matter how far you’ve fallen, you can always get up.  There’s always one more shot you can take.  One more dream to pursue.  One more reason to hope.

Our Q and A is below:

Crossover Chronicles / Brendan: How difficult was thinking back through all of these painful experiences in your mind, and going through the process of actually writing this book?

Chris Herren: The process was exhausting. There were times when I was going through the process of doing the book that I was ready to pull out of it.  It was tiring, it was emotionally and mentally exhausting.  But I got through it, and once I got through it, there was definitely a healing side to it.  It was all out there, I talked about it, and could try to recover and heal from it.

CC / Brendan:  You talk in the book about how Chris Mullin played in a key role in your recovery, but what is your relationship like now with coaches and ex-teammates you played with in the NBA?  Have you reached out to any of them since recovery, or since writing this book?

Chris Herren:  I am very fortunate to be able to look back and say I spent some time with some great people. When I was using, when I was getting high, I was ashamed of the people that I’d come across, and the relationships I formed during those years.  Now I look back and I’m grateful for them.

I called Dan Issel, who coached me as a rookie in Denver, just the other day and thanked him from the bottom of my heart for giving me an opportunity to play in the NBA.  That was the first time I spoke to him since I was traded.

Dan Issel is to me what it’s all about.  He gave me a chance, brought me out to the Nuggets, and that effect he had is what I tried to explain to him the other day.  When I go in now to speak to kids, and I’m on my way to speak to some kids today, when I tell them I played in the NBA the kids listen.  It has a much stronger wrap to it.  That’s the silver lining of my career in the NBA.  I can tell kids that I played in it, and they tend to pay attention more about substance abuse as a result.

CC / Brendan:  You work now with kids everyday now in your Hoop Dreams Program.  How do you deal with the topic of substance abuse with those kids?  Do you wonder, or ask, if they’re going through similar things as you were at that age? Do kids come to you if they’re in trouble?

Chris Herren:  I let them come to me.  Most kids come to me if they have too.  If they have the need, they know I’ve been there, done that, been around the block more than once.  They know that they can trust me with what they’re going through.  So if kids need someone to talk to, they know they can talk to me in the gym.

I don’t go out there and ask them to talk about it, that’s for sure.  The ones that have needed it, have come to me.

CC / Brendan:  From a basketball standpoint, what was your experiences like overseas?

My experience there if I was sober though would have been amazingly enjoyable.  I liked the culture, I liked my teammates, its just that I was a mess.

CC / Brendan:  You were kicked out of BC for drug abuse, while Fresno State kept you in school and tried to help you.  Neither approached seemingly worked at the time, is there a best way for a school to handle that sort of thing?

Boston College drew a hard line and Fresno did everything in their power to help me, and offered every resource that they could find.  Now did it help back then?  No.  But did [Fresno’s efforts] plant seeds in my head for later on in life?  Absolutely.

I can still tell you about every meeting they made me go to, every counselor they made me see, and those brief encounters they stick with you for the rest of your life.  So even though they didn’t help in that moment, they always stick in your head.

CC / Brendan:  Fall River Dreams was a book written by Bill Reynolds, about you as a kid, and came at a tough point in your life. Can you talk about coming full-circle now and writing Basketball Junkie with Bill Reynolds?

Our relationship far extends what that book has done, and anything Basketball Junkie is doing now. He is as part of my family as anybody, and that’s the blessing in Fall River Dreams.  I don’t really pay much mind to it, because it’s a brief moment in my life, not to mention that I lived the nightmare from there for many years.

CC / Brendan:  If there is one message you hope this book would send to people who read it, what would that be?

Chris Herren: I do hope this book sends a message of warning to kids who are getting ready to jump into that world, whether it be in high school, or prep school or college, to raise awareness on that end.

The reason I wrote it though, and more importantly to me, is because addiction is a dark and lonely place, and for people in that place, I want them to know that there is hope.  There is a way out of it.  No matter how deep you go, you can definitely get out of it.

To learn more about Hoop Dreams with Chris Herren go here.  To buy a copy of Basketball Junkie go here.