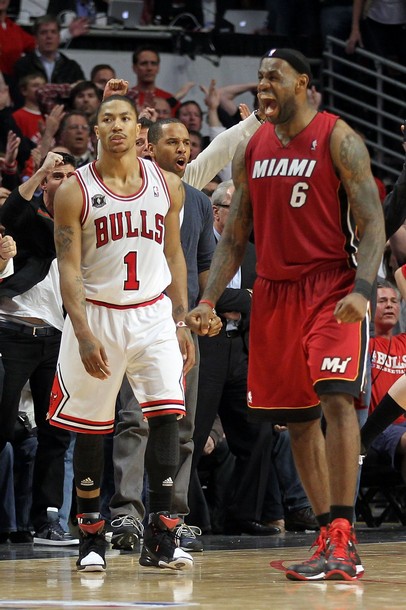 Going through the play by play of each stretch run is a fascinating look at two young teams that may have not been ready to challenge for a title vs two veteran clubs that will now battle in the Finals.  Ultimately, the Bulls and the Thunder were both done in by their inability to close out games down the stretch that will define their seasons (and their amazingly talented, but reckless shoot first point guards).  But, was one comeback/collapse more impressive/depressing than the other?  Let’s break down each of the stretch runs in these two games and discover if one was better… or worse than the other.  Thunder/Mavs details are in blue, Bulls/Heat are in red.  We pick up both games with 4:00 left in each 4th quarter when OKC and Chicago both have 12 point leads…

3:48 99-87 OKC – Russell Westbrook turns the ball over.  Again.  This time though he makes up for it by fouling Jason Kidd in the same sequence and sending him to the line.  Somewhere Ricky Davis is questioning his decision making.  Kidd makes both free throws.  99-89.

3:15 99-89 OKC – After Kevin Durant misses a long jumper (get used to that), Dirk Nowitzki makes a mid-range shot to cut the lead to 8.  99-91.  Scott Brooks, probably sensing the impending doom, takes a timeout to talk it over.

3:02 77-65 CHI – Surprisingly, Dwyane Wade does not turn the ball over and instead hits a running one hander off the glass.  The United Center is still buzzing about plans for Game 6 and casually discussing Oprah, Ozzie, and Blago.  77-67.

2:49 99-91 OKC – Durant decides he’ll mix it up by bricking a long 3 pointer this time.  Luckily, the only Thunder player not in a zombie like trance, Nick Collison, grabs the rebound and Russell Westbrook extends the lead back to 10.  101-91 OKC.

2:40 77-67 CHI – Derrick Rose goes for his trademark maneuver… a shifting, twisting, contorted mid-air pass through 4 defenders.  Somehow, he turns it over.  He then chases Wade down the court.  Wade makes another layup… and is fouled by Rose.  He doesn’t convert the 3 point play though.  77-69.

2:11 101-94 OKC – Russell Westbrook, an 84% FT shooter mind you, clanks both of his foul shots.  Seconds later, Nowitzki makes a Globetrotting off-balance jumper.  Kevin Durant is already planning to ship Westbrook to Abu Dhabi.  Yup, to add insult to injury, the only Garfield related Abu Dhabi clip on Youtube is in German.  Foreshadowing.  101-96.

2:06 77-69 CHI – After a Taj Gibson miss, the Heat come back down the floor and LeBron James (not picked up as a trailer by Rose) hits a three from the wing.  Ruh roh.  Dan Gilbert is hastily typing up another angry Comic Sans letter.  Timeout Chicago.  77-72.

1:38 101-96 OKC – Another Westbrook miss.  Another Dirk make, this time fading away in the paint over Collison.  Westbrook is slowly turning into the One Man Wolfpack of young All-NBA stars.  It’s sad to watch.  101-98.

1:07 101-98 OKC – Durant, who at this point needs reintroduced to Westbrook, turns the ball over.  Luckily for Dallas, Thabo Sefolosha gets back on defense and blocks Jason Terry’s lay-in.  Still a 3 point Thunder lead going into the last minute with the ball.  101-98.

1:00 79-76 CHI – Rose takes another insane drive into the lane and misses.  At least he’s not settling for jump shots.  James comes down the floor and nails his second three in a minute to tie the game.  Timeout Chicago.  So, I hear there are some good seats in Wrigley available.  79-79.

:29 79-79 – Maybe LeBron James just needed to be hated to be clutch.  He hits a pull up J over Ronnie Brewer to give Miami the lead.  You guessed it – timeout Chicago.  Tom Thibodeau is already planning his Tahiti vacation.  81-79 Heat.

:20 101-99 OKC – Thabo Sefolosha is somewhere between Toby Keith and Jim Ross on Oklahoma’s list of Who I Want Shooting The Ball For The Thunder In The Last 30 Seconds Of A Close Playoff Game.  Brick.  Dallas ball.  101-99.

:15 83-80 MIA – After Chris Bosh makes a pair (yes, THAT Chris Bosh), the Bulls dig deep into the playbook for 3 Point Cluster#@!$.  Rose is blocked on a 3 pointer that had no chance of going in the hoop if it were the size of Lake Michigan anyways.  Charles Barkley on Chicago’s last possession: “I don’t know what the hell this was.”  Truly, a fitting end.  Final score – Miami 83, Chicago 80.

Here’s the final, hideous stats for Chicago and OKC in the last 4 minutes of regulation…

Somehow, seeing it in print only furthers the sheer shock of these two collapses.  Unfortunately, both teams went down as suddenly and spectacularly as your favorite stadium implosion.  If I have to pick (and I’m contractually obligated to do so)… the “winner” for worse collapse goes to the…

OKC scored 2 points in the final 4 minutes with 2 of the Top 15 players in the NBA on the floor.  I refuse to believe that James Harden is that critical to the Thunder’s success with Durant & Westbrook on the same roster.  The absolute inability to score, make a good decision, or force the ball out of Dirk Nowitzki’s hand was stupefying.  If it’s any consolation to the Bulls, at least it took Wade & James getting hot down the stretch to win, and really, Chicago’s only offense in the clutch is Derrick Rose vs the universe.

Then, still up by 2 in the final 30 seconds, it’s Thabo Sefolosha who takes the big shot?  Whaaa?!?!  The amazing fall of Russell Westbrook from hero to zero concluded with him practically guarding Kevin Durant on OKC’s final shot of regulation.  It symbolized the Thunder’s mind-numbing and tumultuous collapse.  They never had a chance in Game 4’s OT or in Game 5.  In the end, the Thunder cross the finish line barely ahead of the Bulls.

Time for you to make the call.  Who should be feeling worse over their collapse – Chicago, or Oklahoma City?