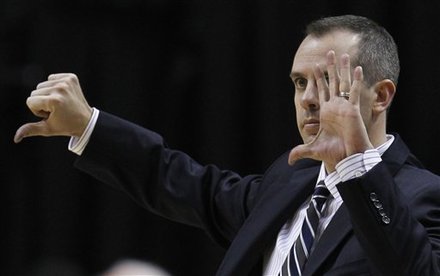 With his 8th seeded Pacers down 3-0 in their best of seven series to the top seeded Chicago Bulls, Vogel finally saw fit to make the move… and win a game.

It’s a brilliant strategy ripped straight out of Braveheart.  Wait until you are almost overrun and then… BAM… you strike!

And now… now… Vogel is ready for his masterstroke.

“We feel like if we win tonight, we’ll win this series,” Vogel told reporters after the Tuesday morning shootaround.

Worst team in the playoffs?

Coach-speak to pump up his troops to believe that having stayed competitive for three games and winning one is enough to carry them through a four game winning streak against the best team in the NBA this season… no matter how improbable that may be?

But they are also a snake that had been lying in wait.  And now Vogel simply has to issue his command:  Execute order 66…  beat the Bulls once more and the rest will fall into place.

It’s a plan so crazy… it HAS to work.

Poor Derrick Rose.  He never even saw it coming.