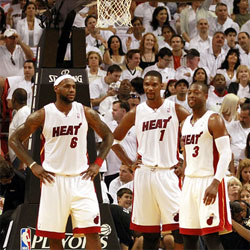 The name of the game is technically “LeBron James, Dwayne Wade, and Chris Bosh Present The South Florida All Star Classic.”  Not exactly catchy enough to roll right off the tongue. Whether they choose some type of abbreviation for it between now and Saturday isn’t really important though, you can call it anything you want when you’re getting a thousand dollars a seat to sit courtside.

This from Ira Winderman of the SunSentinel.com:

In a bid to return the high-end ticket market back to the charitable roots of the event, Florida International University has released a limited amount of $1,000 courtside tickets for Saturday’s 7 p.m. NBA lockout all-star exhibition at the school. In the wake of Monday’s sellout of the 4,000 tickets, priced at $100 and $50, in the lower and upper decks of U.S.Century Bank Arena, secondary markets were offering tickets well in excess of $1,000.

However, unlike the tickets sold by the school for “LeBron James,Dwyane Wade, and Chris Bosh present the South Florida All-Star Classic,” those additional ticket fees were not going toward the event’s charity, “Mary’s Court Foundation,” a foundation established in honor of the late mother of FIU coach Isiah Thomas. An FIU spokesman said Tuesday that the seats being released to the general public had been held back for celebrities and those with ties to the event. The additional seating will be two rows of seats ringing the court.

The newly released tickets can be purchased by calling the men’s basketball office at 305-348-0504. Within an hour of the conclusion of sales, tickets were showing up at StubHub for $1,700 apiece, with the cheapest re-sales prices at the site at $300. Lower prices, still at more than double face value, later emerged. The game will mark the first time James, Wade and Bosh will be on the court together since the Heat lost Game 6 of the NBA Finals to the Dallas Mavericks on June 12.

Makes you wonder what ticket prices could go for if these dudes actually won the NBA Finals.  That aside though, this is just another example of the very real star power these players possess.  Just imagine if you were a scalper in Miami a secondary market ticket broker and you bought ten of those $50 tickets that were released initially. Winderman is saying here that those tickets were going in excess of a thousand dollars prior to the release of these two rows of courtside seats.  Say all the scalper broker got was an even $1,050 on those ten tickets, and then go ahead and do that math from there on that return.