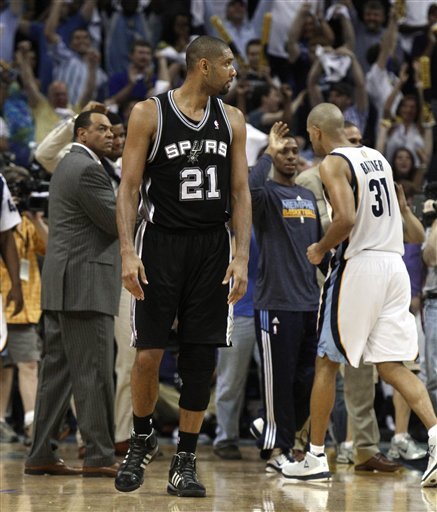 The San Antonio Spurs are walking into the Fed Ex Forum tonight down two games to one… and they have not looked particularly good against the Memphis Grizzlies.  They have been out-muscled, out-played, out-shot… out-everythinged, really.  Even in a situation where the Spurs would be expected to shine — a late-game possession with a time out and a chance to win — the Spurs have inexplicably failed.

So even if the Spurs somehow manage to come back, regain the home court advantage tonight, and battle through a hard, seven game series… they’re done, right?

No.  Not even close.

People like to get caught up in a lot of distractions come playoff time.  People look for hidden meanings in games.  They think “wow, this team looks like crap right now… there’s no way they’ll win it all.”

But nothing could be further from the truth.  We should have all learned by now that performance in one series doesn’t carry over to another.  The 2008 Celtics looked terrible in their road games against the 8th seeded Hawks.  That Hawks team didn’t even win 40 games.  The Celtics had won 66.  Yet the young, athletic Hawks rode their raucous home crowd (amazing, but true) to huge wins to force a seven-game series.  The Celtics were written off as too old to get the job done.  After the Celtics beat the Cavs in a grueling seven-game series, the Celtics were written off again as having gone through too tough a challenge to make it any further.  And after the Celtics lost a home game to Detroit in the Eastern Conference Finals, their first home loss of the playoffs (vs. no road wins), the Celtics were written off for a third time.  And that team went on to win the championship after beating the Pistons and Lakers in six games.

The following year, the Cleveland Cavaliers stormed out of the gates in the playoffs.  They whipped off four double-digit wins in a sweep of the Pistons.  They ripped off another four double digit wins in a sweep of the Hawks.  They were dominating.  They were finally the unstoppable force that would lead to LeBron finally delivering the city of Cleveland it long-awaited title.  That is, until they met the Orlando Magic, and lost in six games.

Fans love to get caught up in the moment.  They love to look at teams like the Boston Celtics struggling at home against the Knicks in Games One and Two and say “look at how bad they look… they’ll be lucky to get out of the second round.”  But then things change, and suddenly the Celtics look dominant again.  And all that mattered is that they won those first two games… because when they finally did put it together, it became a first round sweep.

The Spurs have deficiencies.  There’s no doubt about that.  They lack the necessary size to really impose their will against a bigger team like Memphis or the Lakers.  But they have the players, the experience and the coaching to grind out ugly wins.  It won’t matter if the Spurs shoot 35%, turn it over 20 times and only score 78 points.  All they need to do is force Memphis to score 77.  And as much as people outside of the game will want to write the Spurs off because of it, they absolutely should not.

Because there are no guarantees in the playoffs except for one:  The team that wins four games in a series moves on.  There are no style points.  So I would caution people not to write the Spurs off until they’re dead and buried.  Because that team is too good.  It’s been there too many times.  They’ve seen too much to get rattled by this.  All they need to do is win… and they are very capable of doing it.