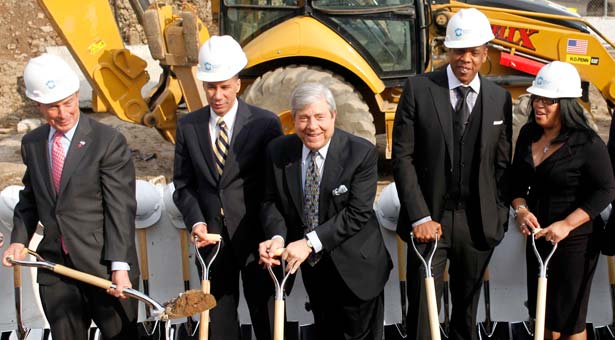 Usher Raymond owns a piece of the Cleveland Cavaliers.  Or at least I think he does, or did, not totally sure the situation there really.  I’ve seen him sitting court-side for a couple games over the last handful of seasons, but I noticed that he wasn’t cc’d on that letter Dan Gilbert wrote to LeBron last season, so maybe he’s not anymore.  Come to think of it, I definitely did not see him at any point all of last season either, because I guess slapping fives with Alonzo Gee didn’t have the same cache’ as showing ‘Bron ‘Bron some love on his way back down the court after an explosive finish.

Regardless of any of that though, don’t go lumping Mr. Carter in that same mix of dead-beat, figure-heard, celebrity owners, because he actually does have both a function and voice with the Mikahail Prokhorov owned Nets – soon to be stationed in Brooklyn, New York.  For hip hop fans who thought the long anticipated release of Watch The Throne lacked that proverbial umph most expected, don’t blame Jay-Z, because the dude has been pretty busy with other more important things lately.  Specifically, getting this Brooklyn Nets thing done.  This first from Black Sports Online over the weekend:

“Beyond sitting court side or in the owner’s box, you do not really hear about the role they [celebrity owners] play as owner for their respected franchises; the same cannot be said for Jay-Z.  A lot of it, say team insiders, started with Mikhail Prokhorov taking control of the team. In May of 2010 when Prokhorov arrived in the US for the Draft Lottery and his inaugural round of press conferences and briefings, one his first stops was at the 40-40 Club, Jay-Z’s place, for a meeting with the team’s most famous minority owner.  We are told the meeting went long…more than an hour long…as the two owners and Dmitry Razumov talked and toasted a new era in Nets basketball and their relationship.”

BSO went on to summarize a collection of functions that Jay-Z has been managing throughout this process (posted first by NetsDaily.com) over the last few months.  They include Uniform and Club Space design, as well as helping to create and design branding for the Brooklyn Nets, all in addition to the excavation work for the actual arena that he is pictured doing above.  To that point, Nets General Manager Billy King went on to describe Jay’s role with the team:

“To see (Jay-Z) give a pitch on Brooklyn, and the passion about going to Brooklyn – you see it on tape, you see it on TV. To see him in a room with Carmelo, and making it, you see the passion there.  And if he’s as passionate about Brooklyn, I just can’t imagine what the other people that live there are going to be like when we get there. And to see him as involved and as passionate about the Nets, to me, it’s a real positive. It’s not just something that he’s just using, or investing in. It’s something that he’s going to be involved in even more when we get – next season, I think, even further, we go to Brooklyn.”

To clarify, the Carmelo comment was made in reference to talks back in February or whenever it was when he was meeting with the Nets during that whole trade me now process he was going through prior to leaving Denver.  But getting back to Jay-Z, I’ll only add that I respect the fact that he’s active in his role as minority owner with the Nets.  I like that he’s involved in the process, respect the passion, and I do think it’s cool that he’s helping bring the Nets / NBA Basketball to his hometown of Brooklyn.  I’m sure there are some New Jersey natives that aren’t too cool with it, but oh well.  The uniforms will be sick, I’m pretty sure about that.  Now we’ll just see if Jay-Z can convince people like Deron Williams to actually want to play for the team once they move there.