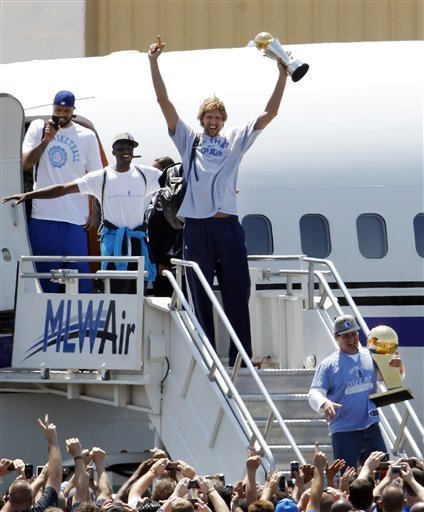 Hey, have you heard?  The Dallas Mavericks won the NBA Championship!

That means they’re going to throw a parade.  And those can get expensive.  Cities can spend a couple of million bucks when you factor in the extra security and the clean up.  Yes sir… cities can spend a lot, that is, unless you’ve got Mark Cuban as your owner.

“We’ll do it,” Cuban said early Monday morning. “All I told them was — Terdema Ussery, our president — you plan the parade. I’ll pay for it because I don’t think it’s right for the city to have to pay for it. And let’s just have some fun.”

There you go, Dallas.  The party is on Cubes (can we start calling him that?  I think I want to start that).

Private funding to throw a victory parade isn’t a new thing.  Last year, the Lakers covered the cost of the parade and they picked up half the tab the year before.  And with state and city budgets still in the toilet, this might just be a new trend.

Hell, if teams can ask taxpayers to fund stadiums, then why can’t the taxpayers ask the teams to pay for the mess they make celebrating the championship?