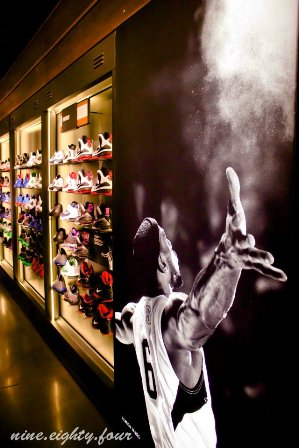 Of course Basketball is a key core Nike business, but even with the current NBA lockout, Nike’s optimism appears as strong as ever. While Nike did not have the luxury of allowing TNT to display their latest lines of signature basketball shoes on the feet of stars like LeBron James or Kobe Bryant during games last week before a national NBA opening week audience, buzz over Nike Basketball remains high. Instead of Charles Barkley, Kenny Smith, and now Shaq breaking down game footage of the NBA’s star studded match-ups, Nike’s top stars continue to be featured in their latest footwear and fashions despite the NBA lockout and TNT airing re-runs of Law & Order and CSI.

But while NBA business is currently locked in a four month plus staring contest over BRI percentages and System Deal points, Nike’s Basketball business isn’t. In order to continue to move forward Nike is constantly searching for non-conventional new ways to present their signatures and assortment of basketball products. All summer long we watched as Kevin Durant, LeBron James and the rest of the Nike Basketball Family demonstrated that “Basketball Never Stops”, based around a creative marketing campaign where top Nike endorsers wore T-shirts branding the new slogan.

Whether it was on Nike China barnstorming tours or at Pro-Am’s and Pickup Games across the country, the branding strategy has worked. Now that those Drew and Goodman League games have died down and a new CBA agreement could be nearing, it appears Nike was looking for other ways to capture the consumer’s attention and maintain sales. One of which is by opening state of the art concept stores idolized by many NBA fans and basketball enthusiasts who are interested in the Brand Jordan, LeBron James and Kobe Bryant displays that now look more like art exhibits fully featured in the new Nike Portland.

After the ribbon cutting ceremony attended by various Nike Executives, staff and Portland Mayor Sam Adams, Nike took various local media as well as Sports PR Agency, Sports Media World, on a tour helping us capture the grand opening festivities. When the doors finally opened on day one for business, the scene looked something like this as customers poured in by the hundreds:

On the guided media tour we had a chance to catch up with Tim Hershey, Nike’s VP of North American Retail, as he offered his thoughts regarding the new Portland store and the thought process behind the new design:

“We’re committed to expressing the sport of basketball, not just in what they compete in, but also in what they train in, and how they express their sport through lifestyle. So you will see a collection upstairs which crosses all three of those components. We have a full expression of our LeBron James selections, as well as Kobe’s, and then the styles and silhouettes that complete that wardrobe.”

“We’ve got the best athletes in the world as part of our Nike Family, and they are brave partners for selling our brand, and representing us both on-court and off-court.”

To be honest, the way Nike has been able to adapt to this prolonged lockout and continue to brand their campaigns for basketball related products has been very impressive. Nike Sportswear has also featured Lakers’ Lamar Odom in viral videos, while top Jordan Brand athletes Chris Paul, Carmelo Anthony and DWade have also been prominently featured around their new signature lines as well. Nike’s been able to dominate the basketball category market for years, and when you see new Brand Concept Stores like this open, it wont even matter if their Top NBA star endorsers are locked out by their employer. Truly, “Basketball Never Stops”. 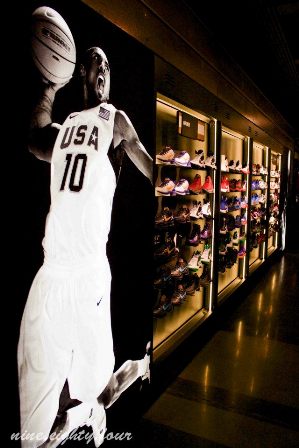 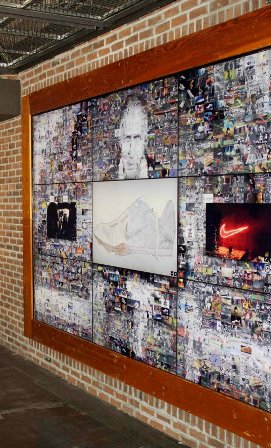 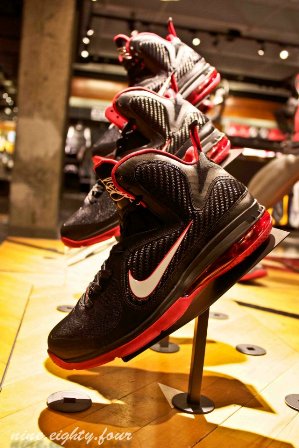