Instead of making their NBA debuts this week, first round draft picks Nolan Smith and Cleveland Cavaliers’ Kyrie Irving made their debuts with the Cameron Crazies. On Wednesday, the two former Duke guards watched Coach K’s group do battle with Shaw College, alongside the zaniest bunch of college basketball fanatics anywhere. Take a look at the picture below and let me know if you can spot Nolan Smith. As a couple hints, he’s not the dude in the blue blazer, or the guy in the Duke jersey, blue wig, and no undershirt.

Yep, he’s the one sponsored by Adidas, you got it. Now take another look at the guy with the blue wig and no undershirt. If that facial expression doesn’t read excitement I don’t know what does.

Anyways, as legend has it, Nolan Smith rolled into the Duke student section early and watched just about the whole game there with a bunch of fans who used to pop blood vessels in their necks cheering for him over the past four years. He eventually convinced the number one overall draft pick to join him by the second half too, and from there it sounds like a good time was had by all.

That according to Kyrie Irving, who offered the following:

“It was awesome,” Irving said. “My first time actually being with the Crazies.”

And by awesome he means he wore a Viking helmet, which is obviously awesome. 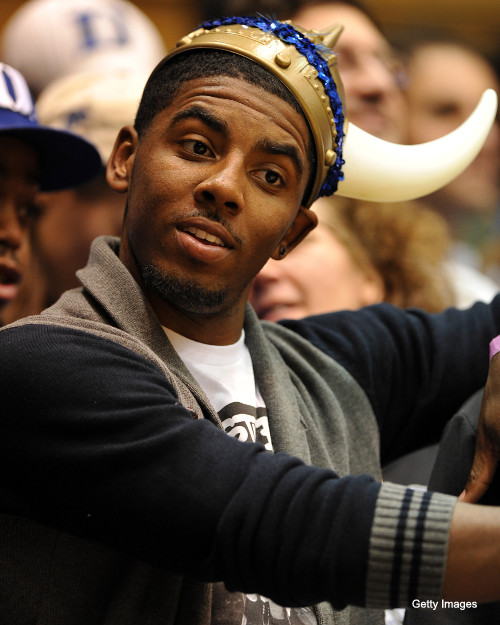 According to Smith, he really didn’t have anything better to do last night than be a Cameron Crazy, and it sounds like it’s not a one game deal for the Blazers Rookie PG.

“I couldn’t turn that down,” Smith said. “I have nothing else to do right now, work out and be a Cameron Crazy. That’s what I’m doing.”

I’ll just leave you with this.  It’s funny that two NBA Draft picks watched a game with the Cameron Crazies.  It’s even cool that Irving and Smith went and essentially hung out with the students who cheered for them during their careers at Duke for a couple hours. Kyrie Irving’s Viking helmet is also something I can look at more than a few times and chuckle each time I look at it too. All of these things I appreciate about this story.

What I do hate though, is that these two guys didn’t make their NBA debuts this week.  It really sucks. I was hoping to cover Kyrie’s debut as a member of the Cleveland Cavaliers this week, and instead I’m trying to distract myself from this Lockout by talking about his debut with the Crazies. Such is life though, I guess.