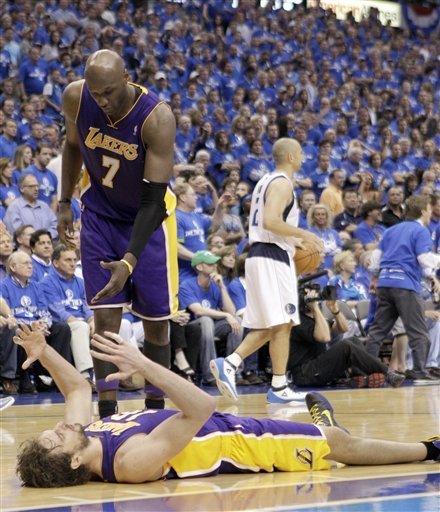 In 2010, Pau Gasol came up huge and dismissed talk of “being soft” when he dropped 19 points and 18 rebounds in a Game Seven comeback win for the Los Angeles Lakers over the Boston Celtics.

But as this year’s playoffs showed, Pau didn’t “dismiss” the soft talk as much as he temporarily muted it.  He was consistently beaten on the blocks and generally outworked as the Lakers were unceremoniously swept out of the playoffs by the Mavericks.  As the Dallas Mavericks waited for Oklahoma City and Memphis to stop beating each other up, Lakers fans were whispering about rumors that Kobe’s wife and been talking to Pau’s girlfriend or Shannon Brown sleeping with Pau’s girlfriend.

In the end, Pau says talk of his personal life had an affect on him.  But the real problem… was himself.

I’ll be honest.  That quote doesn’t help his reputation at all.  Some people can block stuff like that out and get past it, some can’t.  Pau clearly can’t.  That can’t make Lakers fans feel great.  Pau is obviously a very necessary piece to the puzzle.  As good as he can be offensively, if squawking about his personal life is carried on to the court, then he will become more of a liability than a help.

Kobe ain’t getting any younger and Andrew Bynum is still too much of a hot-head to be counted on.  If you can’t count on Pau in La-La land, then there’s more work to do there than we thought.