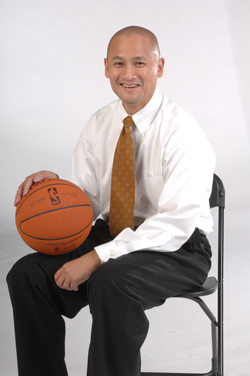 Just days after it was revealed that Portland GM Rich Cho was contemplating suspending Brandon Roy for his comments about wanting more playing time… comes news that Cho has been fired.  The team announced today that Director of College Scouting Chad Buchanan will become acting GM.  Here’s some of the Blazers press release:

“The fit between Rich and our team simply wasn’t right,” said Trail Blazers President Larry Miller. “This was a tough move because I respect Rich and he’s a good person with many strong skills. But it simply wasn’t a good match.”

[…] Trail Blazers Owner Paul G. Allen said the move is part of the franchise’s commitment to building a championship contending team. “This decision, as difficult as it was to make, reflects our willingness to admit and recognize that things haven’t worked out,” Allen said. “We’re going to be tough on ourselves in assessing what we could have done better, and then go out and find the executive who is the best fit with the needs of our franchise. That chemistry and connection is critically important.”

Cho’s most significant move was getting Gerald Wallace for Joel Przybilla, Dante Cunningham, Sean Marks and a couple of draft picks.  I’d say that was a pretty good move for the Blazers and there was never an indication that Cho was in any kind of trouble.

But then came the Roy issue.  Cho thought Roy’s comments were a plea for more playing time through the media… something Roy had been warned about.  Larry Miller, Team Owner Paul Allen and coach Nate McMillan all disagreed and the matter was dropped.

Only it wasn’t.  And for the second time in a year, a GM with a view that ran counter to the team hierarchy’s has been dismissed.  Kevin Pritchard had done pretty well with the Blazers but ran afoul of the higher- ups… so they parted ways with him.  Now it’s Cho’s turn to be shown the exit.  I’ll quote Yahoo’s Adrian Wojnarowski one more time:

With Paul Allen, Larry Miller and Vulcans, no GM will ever please them. They want a weak-minded person willing to be controlled. A waste.

Portland has gone from “hot, up-and-coming team” to “potential laughingstock” in a matter of a couple of seasons.  Portland’s rise has been stunted once.  Who knows if Cho could have kept the momentum going, but the Wallace move was a great start.  But now no GM worth his salt will want to run the Blazers because he’ll know he’s not really running the team.

It was nice knowing you, Blazers.  The immediate future will be quite interesting… and not in a good way.