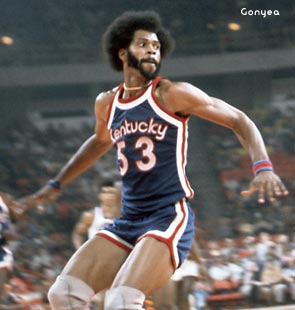 Artis Gilmore played his last NBA regular season game in 1988, at the age of 39, as a back-up center for the Boston Celtics.  He scored 7 points and grabbed 8 rebounds against his former Chicago Bulls team on a night that saw a 25-year-old Micheal Jordan drop 46.  He should have been inducted into the Naismith Hall of Fame back when Jordan was hacking away at baseballs, but he wasn’t.  Instead the voting committee pulled a twenty-three year prank on Gilmore for no reason, and made him wait until he was 62 to bestow the honor he earned and will rightfully accept this Friday.  Sucks that it took this long.

The fact that it took Jerry Colangelo starting the Hall of Fame ABA Sub-Committee, after Gilmore was out of regular eligibility, to eventually punch the ticket for the guy they called “The A-Train” to ride into the Hall on is also a traveshamockery, in the sense that it was needed to get Gilmore in, but what are you gonna do? For a long time, and maybe even still today, there has been a faction of people who continued to be pretty bent about the ABA trying to carve out a piece of the NBA pie back in the ’70’s, and most speculate Gilmore’s wait is centered around him being penalized for playing in the ABA out of college.  If the NBA offered to pay him what he made in the ABA those years, I think he’d have probably been a first ballot Hall of Famer.

He could have signed with any team in the NBA after leading the Jacksonville Dolphins to the NCAA championship game against UCLA as a senior in college, but he signed with the Kentucky Colonels of the ABA as a rookie instead.  They threw more jack at him than most guys were making in the Association at the time, and he paid out on that investment during his first season with the Colonels.  He stood 7’2″ tall with an afro that made him six inches taller, and he won the ABA Rookie of the Year honors during the 1971-72 season along with being named league MVP that same year as well.  He went on to play four more seasons in the ABA, and led his team to the 1975 ABA Championship where he was also named MVP of the playoffs that postseason.  He averaged 22 points and 17 rebounds per game during the 420 ABA contests he played in, and then moved on to the NBA at the age of 27 when the ABA folded.

In 1976, whoever wasn’t on one of the four teams who merged with the NBA (Denver, Indiana, New York, San Antonio), was entered into a “dispersal draft”.  Gilmore, also known as the “Gentle Giant” in addition to the “A-Train” handle, went first to Chicago in that draft and is currently regarded as the best center in Bulls history in his first stint for the team.  Over the next six seasons in Chicago, he averaged at least 19 points and 10 rebounds per game and helped the Bulls make the playoffs twice during that time.  In 1986 he was traded to the San Antonio Spurs, and he would go on to help them to the playoffs three more times, and average over 20 points and 11 rebounds per game for the Spurs during the 1984-85 season – his 13th as a pro, by the way, and he played in 81 games that year.  He would go on to play a couple more seasons with Chicago after that, before playing his final year in the NBA with the Celtics in ’88.

He made the ABA All Star game in each of the five seasons he played there, and was additionally an All Star in the NBA six more times in his career.  He led the ABA in rebounding four times, and led the NBA in Field Goal Percentage during four consecutive seasons as well.  The dude shot 67% from the floor in the NBA once, and currently holds the NBA record for Career Field Goal Efficiency.  Shaq is second.  If he played today, he would be a first ballot Hall of Famer without question.  He would have some competitive match-ups with a center like Dwight Howard, and then crush, obliterate, and destroy guys like Andrew Bynum and any other center type considered to be on that next tier after Howard.  If you don’t believe me, ask Kareem Abdul-Jabbar who Artis Gilmore dunks directly on the face of in this video, here.

So congrats on being a Hall of Famer for the last twenty-three years, Artis.  Glad you’ll be remembered there now forever.