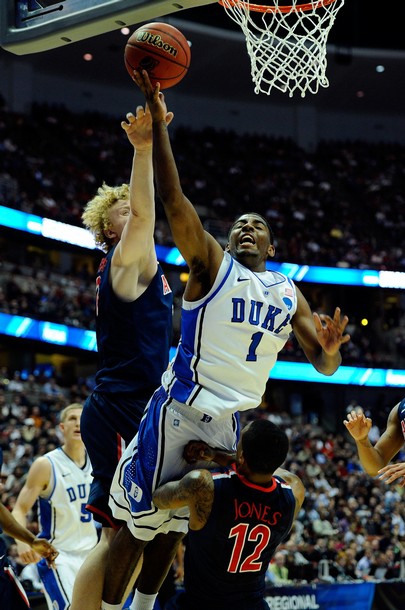 As we count down the days and hours to the 2011 NBA Draft, it looks like the suspense for the #1 pick has ended well before the draft begins.  An ESPN report by Ric Bucher claims that the Cleveland Cavaliers have committed to taking former Duke PG Kyrie Irving with the first pick in the draft:

The Cavaliers, after taking the temperature of the Timberwolves and Jazz to see if Kyrie Irving could somehow fall to No. 4 in Thursday’s NBA draft, are now committed to the former Duke guard as the No. 1 pick and are fielding offers for the fourth pick, league sources said Monday.

In a perfect world for the Cavs, they would draft Irving and former Arizona forward Derrick Williams, which is why they were also interested in dealing for the second pick.

But what they found out is that getting both players would be a stretch.

That’s disappointing in the sense that this looked to finally be a draft where there was just a shred of uncertainty with the #1 pick.  Oh well, it was fun while it lasted.  Cleveland’s dreams of getting both Irving and Williams in this year’s draft was nice while it lasted as well, but it looks like that won’t happen either.  Irving has been touted as the #1 pick for ages, but with his injury and a great performance in the NCAA Tournament by Derrick Williams, there was some doubt as to who would be the top pick.  While the NBA has become a league dominated by point guards, Williams’ all-around game and athletic ability makes him a juicy prospect and if I was running the Cavs, he would be my pick.  By all accounts, Minnesota will take Williams at #2 and add to their glut at the 3/4 with Michael Beasley, Wes Johnson, and Anthony Randolph unless a great offer comes on the table.

Continuing with the dominos, it will be interesting to see what the Jazz do at #3 and the Cavs at #4.  Reports are that the Cavs are working out Kentucky PG Brandon Knight and would-be-Kentucky C Enes Kanter.  If the Jazz pull a mini surprise and go Kanter, it’s hard to see Cleveland pick another PG in Knight (unless David Kahn is whispering in Dan Gilbert’s ear).  Perhaps that would then open the door to one of the European big men – Jan Vesely or Jonas Valanciunas, or a trade as Bucher suggests.  If that happens, Knight could fall in the arms of the Raptors and the dominos would continue to fall.

So, while the suspense may have ended at the top, there are still plenty of intriguing storylines throughout the rest of the draft that will be worth tuning in for Thursday night.  At the very least, tune in to see crazy suits, David Stern get booed mercilessly, Stuart Scott at his awkward best, and Jay Bilas try to sound smart with his Duke education by making up words about length and wingspans.