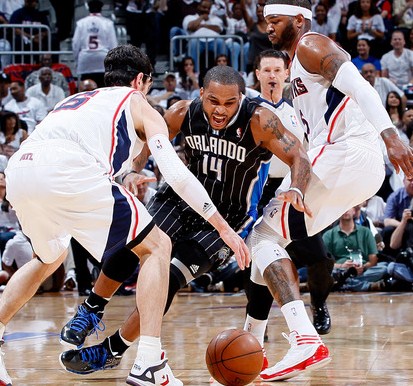 There’s nothing quite like some bulletin board material in the playoffs.  Man, there’s just something about that added element of trash talk that adds drama to the series.  It makes you feel like these guys really don’t like each other… that they’re as emotionally invested in this whole thing as the fans are.

And can you imagine what Jameer Nelson must have said to get this reaction from the Atlanta Hawks:

“A lot of their players are already claiming they are already going to make the second round, so that gives us a little added motivation, too,” [Josh] Smith told reporters in Atlanta. “If that doesn’t get you geared up, I don’t know what does…

“It was surprising, knowing that we are a better team,” Smith said. “They understand that they can’t just run us off [the court]. It’s going to be a tough series, and they know it.”

Wow… that must have been a doozy of a statement.  What did Jameer say?  Did he predict a sweep?  Did he say the Hawks don’t deserve to be on the same court with them?

Nelson told Bulls star Derrick Rose — while Rose was being interviewed by ABC — “Catch you in the second round.”

Ummmm… great.  Well then.  Better be careful over there fellas.  You just might start catching some fines from the league.  Of course, the fines will be for boring people to death… but still.