Every morning, we’ll have a look at the previous night’s action in a round up of recaps and reactions from around the web.

The Boston Celtics fell to 0-3 after a blowout loss to the New Orleans Hornets, who were playing without Eric Gordon and the The New York Knicks faded in Golden State.  The Miami Heat almost completed the “disappointing loss by good teams” theme, but Dwyane Wade bailed them out (thanks to a travel that wasn’t called) in the last second win.

Chris Bosh with the block, LeBron James with the save that he, somehow, sends 3/4 of the way down the floor, where Dwyane Wade finishes with the easy dunk. 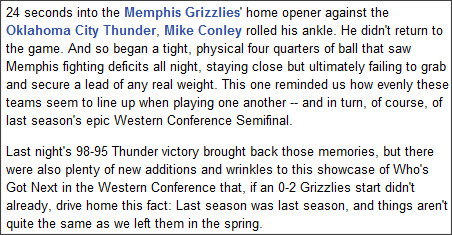 Kevin Durant does it again as Thunder edges Grizzlies | NewsOK.com via kwout

The Rest of the Games

After starting the game 4-17, Monta Ellis shoots 4-5 in the 4th quarter to polish off the Knicks

The Hornets took advantage of 21 second chance points to put the sloppy Celtics away.  Jarret Jack and Carl Landry combined for 41.

Every Hawks starter hit double figures and Josh Smith and Al Horford pitched in double-doubles in the easy win.

LeBron James and Chris Bosh combined for 60 points, and Dwyane Wade made up for a 10 point performance by banking in the game winner with 2.9 seconds left in the game.

Nine of Danny Granger’s 21 points came in the 4th quarter and all five Pacers starters scored double figures as Indy held off the Raptors.