Every morning, we’ll have a look at the previous night’s action in a round up of recaps and reactions from around the web.

LeBron James and Dwyane Wade powered the Miami Heat to a huge first half lead, but Ray Allen and Rajon Rondo led a second half comeback.  The difference, though, was rookie Norris Cole who scored six of his 20 points, and had a key steal of a Boston in-bounds play, in the final 1:31.  Meanwhile, out west, the LA Lakers got their first win of the season by pounding on the Utah Jazz.

Kobe Bryant crosses Raja Bell over, jumps off the wrong foot, and finishes 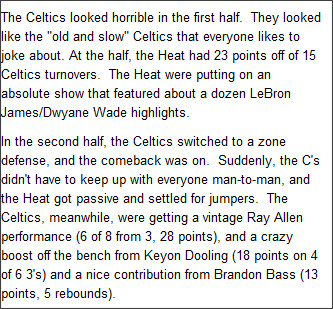 The Rest Of The Games

Six Hawks hit double figures as the Hawks stormed out to a 17 point first quarter lead, that grew to 22 by halftime.