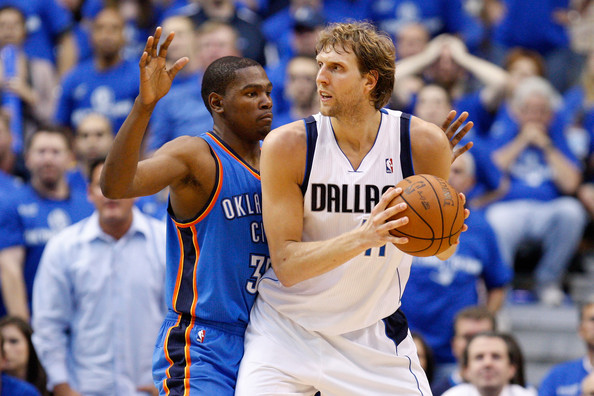 Today moves to the second five in our list of the Top 15 One on One players in the NBA as we count down numbers 10 through 6.  In case you missed 15-11 yesterday, you can check it out here.  The Top 5 comes tomorrow.  Which players do you think would be the hypothetical masters of a one on one showdown if we took the NBA to the park court.  Comment it out and let us know your thoughts on our list thus far.

We might as well start off today’s list with another surprise, Zach Randolph of the Grizzlies.  Now, if this was any of the last ten years, you would be hard pressed to find Zach Randolph on any list involving the word “top 10″ and ” NBA player” unless it involved dollars earned per criminal case.  But this year in Memphis was a transformational one for Z-Bo as he led the Grizz to Round 2 of the Playoffs and dominated portions of the series win against San Antonio.  Did you know he’s averaged 20+ PPG for four straight seasons on three different teams?  Randolph makes our list because he has the best traditional low-post game in the Association, on display in the video above.

Blake Griffin is much more than awesome dunks… although it doesn’t hurt to see every one of his dunks from the past season.  Griffin has a decent set of post moves and can even stretch his range close to the three point line.  It may be too soon to place Griffin on this list of the NBA’s best, but seriously, would you want to walk out on the court against this animal and end up on a poster?  In five years, Griffin may be number one on this list.

If this were a list of the Top 15 players in the NBA, Westbrook would have a long way to go in improving his team game to make the list.  Kevin Durant must have the patience of Job to put up with Westbrook’s maddening point guard “skills.”  Thankfully though, Westbrook doesn’t have to worry about feeding anyone but himself in a one on one matchup.  One of the fastest players in the game would be an impossible task to stay in front of and his jump shot is slowly improving.  His defense is also improving as he finished third in steals last season.  You know he’s dying for a one on one game with Durant for OKC alpha male.

Perhaps seventh place doesn’t do Dwyane Wade justice.  All-Star Game MVP, Finals MVP, scoring champ, seven time All-Star, and Olympic gold medalist are just a few of the accomplishments on Wade’s certain Hall of Fame resume.  It’s a shame that Wade has never quite had the chance to get the credit he deserves, especially having to play second fiddle to LeBron’s drama this season.  Wade is the best finisher in traffic in the NBA and even earned a mathematically improbable commercial spot (how does one get up twice after falling down once?) for his toughness driving to the basket.  In addition, he has shown throughout his career a willingness to have the ball in his hand with the game on the line.

*Note that Wade would move to #1 on the list if Bennett Salvatore happened to be refereeing.

Superman is a bit of an unorthodox choice as big men are not routinely favored in these type of fantasy one on one lists/tournaments.  Howard isn’t going to step out and knock down any sort of jump shot outside of Earl Boykins.  He hasn’t even really developed a legitimate post game.  In fact, if Dwight had a consistent jump hook, he could score 30 points a game easily.  But Dwight does two things better than anyone else in the NBA at the moment – dunk and block shots.  Good luck scoring against the reigning three time defensive player of the year.