The NBA regular season is in the history books, so it’s a great time to take a look back on the memorable 2010-2011 season.  This season was to be one of the most anticipated, most watched, most exciting regular seasons in recorded history with the fallout of The Decision and star teams in Boston and Los Angeles.  However, the NBA regular season wasn’t just about those preseason favorites as many teams and players surpassed expectations and others fell short.  Now, just any old surprises and disappointments article won’t suffice for Crossover Chronicles, so why not rank the Top 5 Surprises and Disappointments of the NBA Season.  Feel free to disagree in the comments below.  Better start with the bad news first… 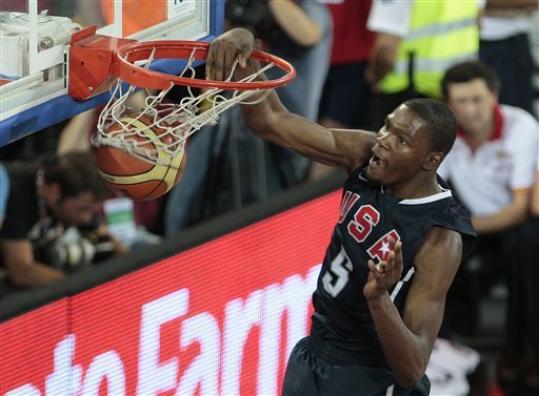 -Call me crazy, but the leading scorer in the NBA has been a disappointment.  Kevin Durant took a quantum leap this Summer as the man at the World Championships in Turkey for USA basketball.  It was one of the more scintillating performances we’ve seen on the international stage by an individual player.  Perhaps that took something out of Durantula this season.  His numbers are down across the board from the 09-10 season.  FG%: 47.6-46.2, 3PT%: 36.5-35.0, Reb: 7.6-6.8, Pts: 30.1-27.7.  Also, both his scoring and shooting efficiencies took a hit as well.  It’s not fair to say Durant regressed this season, OKC has steadily improved as a team (especially after the Perk trade).  However, Durant maybe didn’t take that next step towards being an all-time great that we may have expected this Summer.

T5) Miami Heat
-Ok, I’m cheating from the start, but if we’re going to have a great player be a disappointment, we need a great team as a disappointment too.  That team is the Superfriends in Miami.  Much to everyone’s absolute shock, the Heat did not go 82-0, did not rewrite the rules of basketball, and were not crowned champions for all eternity before the season began (even though that’s what their anointing party screamed before the season).  Are the Heat a good team?  Absolutely.  But, this wasn’t supposed to be merely a good team.  No, it was supposed to be the best ever.  We didn’t get that.  Instead, we got two and a half great players struggling to find a consistent winning formula all season long.

4) John Salmons & the Bucks
-To every NBA fan’s shock, John Salmons carried the Bucks into the Playoffs last season.  When Milwaukee gave him a massive contract extension (5 years, 39 mil), it made some sense even though many knowledgeable fans knew it wouldn’t turn out well.  A 31 year old journeyman swingman with a fresh, big contract was probably always due for a dip in form.  Salmons delivered just that with his worst shooting percentage in 7 years and a six point per game scoring decline.  Milwaukee’s decision to also pick up Corey Maggette’s contract for 3 years, 31 mil AND sign Drew Gooden to a 5 year, 32 million dollar deal along with Salmons’ money was a surefire way to handcuff a promising franchise for the next several years.  Well played Milwaukee, well played.

3) Danny Ainge
-When Danny Ainge pulled the trigger on a deadline deal sending Kendrick Perkins to OKC for Jeff Green, the Celtics were the top seed in the East at 41-14.  Since the trade, Boston limped towards the finish line with a barely .500 record and now sit 3rd in the tough Eastern Conference.  For a team who looked destined to get back to the NBA Finals for the 3rd time in the last 4 years, their GM has made a potentially monumental gamble and mistake.  For some reason Danny Ainge didn’t fully understand what Perkins meant to the team both on and off the court.  Their trademark defense has been a seive in the paint, the O’Neal brothers haven’t been able to stay healthy to replace Perkins (Robert Parish or Dave Cowens might as well suit up), and most of all, Rajon Rondo’s game has been wildly inconsistent since the trade of his self-proclaimed big brother.  Now, entering the playoffs, there seems to be little hope the C’s can turn back the hands of time to make one last run without their enforcer.

2) Jerry Sloan’s exit from Utah
-One of the most lasting disappointments and biggest shocks of the 2010-2011 NBA season will always be the sudden resigning of the league’s longest-tenured coach, Utah’s Jerry Sloan.  Sloan led the Jazz for 23 seasons winning almost 1200 games and becoming a Hall of Famer.  But, his constant clashes with Deron Williams proved too much to take for both to coexist.  In the end, Utah lost both men when they traded Williams to New Jersey at the deadline.  The stench of getting Sloan canned will follow D-Will for a while, no matter who he ultimately plays for in his next contract.  But the bigger loss for Utah has to be Jerry Sloan, a true legend who never seemed to get the respect he deserved, except maybe after his career came to an abrupt end.

1) Looming lockout
-Undoubtedly, the 2010-2011 NBA season was one of the most anticipated, and most successful in league history.  And with the ongoing struggle for labor peace in the NFL, one would think the NBA wouldn’t want to kill the momentum they’ve fought so hard for in the last few years.  But, even a new collection of young, likeable stars and successful veteran teams doesn’t seem like it will be enough to satisfy owners looking for more of the pie.  Both sides have already begun the verbal bombthrowing threatening a lockout that would certianly stall the rising interest in the league.  Even yesterday, there were already rumors about the demise of the Summer League.  The looming lockout hangs over the Playoffs now with a dark pall that should make any NBA fan shudder.  With players looking to hang on to expensive contracts and owners looking to curtail rising costs, this could be the most damaging labor situation in any sport this year.

(See the Top 5 Surprises of the NBA season after the jump!)

5) Memphis Grizzlies
-With as stacked as the Western Conference has been in the last decade, the Memphis Grizzlies were one of the teams on the outside looking in at the playoff picture at the start of the season.  Their over/under number was somewhere around 40 wins.  Yet, with their mishmash roster including The Other Gasol, Zach Randolph (their leading scorer & rebounder), Rudy Gay, and Mike Conley, they have somehow sneaked past playoff mainstays like Phoenix and Utah into the postseason.  To put the Grizzlies playoff run into perspective, Tony Allen has been one of their stars down the stretch (14.0 PPG/28.9 MPG in March).  Yes, I did a split take when I saw those numbers, too.  Did I mention Zach Randolph is their leading scorer and rebounder?  The same Zach Randolph that produced this moment.

4) Blake Griffin
-We all hoped and prayed that Blake Griffin would be able to come back and thrive from the injury that kept him out of competition last season.  Thankfully, NBA fans were treated to the most exciting player in the Association as Blake Griffin took the league by storm.  We all knew Griffin would be great if healthy, but every time he dropped a play like this, we were more awed than before…

3) Tradeapalooza
-There were so many trades at the deadline this year, it was incredibly hard to keep track.  In fact, over half the league’s teams made some sort of move at the deadline.  That didn’t even include an earlier deal that completely remade the Orlando Magic by getting back Hedo Turkoglu and adding Jason Richardson and Gilbert Arenas.  We even saw the Celtics (sorry Danny) roll the dice and shake their foundation to the core.  There were superstars being traded to New York AND New Jersey amidst an overall firestorm of activity.  All of those trades, and all of those franchises taking risks was stunning.  It was all very surprising for a league that had a reputation as one where franchise-altering shifts didn’t happen… one formerly known as the No Bal… well, you can figure it out.

-Call it the Ewing Theory, call it addition by subtraction, call it whatever you want, but the Denver Nuggets have been flying high without Carmelo Anthony.  Their resurgence is the greatest surprise out of the NBA’s Tradeapalooza.  The Nugs were an afterthought after trading their superstar to the bright lights of MSG, but it looks like Denver can make some playoff noise minus Melo.  The Nuggets have a superior record to the Knicks since the trade and climbed to 5th in the West.  They still maintain the best offense in the league and coach George Karl has done an outstanding job fitting in pieces like Ray Felton and Danillo Gallinari.  And while they face a tough 1st Round matchup with OKC, their end-of-season run was one of the pleasant surprises in the Association.

1) Chicago Bulls & San Antonio Spurs
-What were the odds before the season that these two teams would end up having the best records in the NBA and be the only teams to break 60 wins?  50-1?  100-1?  The same odds as Adam Morrison winning MVP?  (We would have to use some sort of differential equation to discover those odds I think.)  The ascent of these teams to the top of the each conference came from nowhere.  The Spurs’ stars were too old and the Bulls’ stars too young to make a legitimate run at the NBA title this season.  However, San Antonio has been bolstered by a more balanced attack and role players like Gary Neal, DeJuan Blair, and George Hill stepping up in a big way.  Chicago has been led by the amazing Derrick Rose and defensive mastermind Tom Thibodeau, who has to win Coach of the Year in his first season on the bench.  The success of these two teams, now with homecourt throughout the Playoffs, is certainly the biggest surprise of the 2010-2011 season.