The Golden State Warriors backcourt combination of Monta Ellis and Stephen Curry can put up points in a hurry.  As far as offense goes, you’d be hard pressed to find a more explosive duo at the 1/2 spots.

But because of two very different issues, the Warriors may be facing serious problems with each of their high-octane guards.

Curry is coming off surgery to repair damage to his right ankle in the spring, turned that ankle again last night and had to be helped off the court.

The Warriors announced that it was an ankle sprain, which should be both…

-A relief for the franchise and its fans, because a sprain isn’t the worst thing, and may not keep their point guard/foundation out for a prolonged amount of time;

-And very worrying for the franchise and its fans, since Curry’s ankle really didn’t appear to bend much on the play.

They’ll X-Ray that ankle today just to make sure it’s nothing more than a sprain, but that’s still becoming a major concern for the Warriors.  The team’s refusal to deal Curry for Chris Paul shows how highly they regard him.  To now see that right ankle become an issue again could be devastating.  Chronic ankle problems are a killer for basketball players, especially guards who rely on quickness to make cuts. 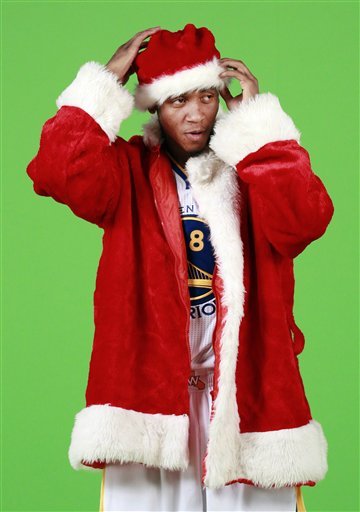 Meanwhile, Monta Ellis’ problems come off the court.  At some point today, Ellis and the Warriors are going to be sued.

According to an email from the Law Offices of Burton F. Boltuch, the plaintiff will file the suit Wednesday morning in Oakland at the Superior Court of Alameda County. Afterward, a press conference will be held to discuss the allegations.

The photo will be revealed – along with the identity of the accuser – at the press conference, Boltuch said.

I’m betting he didn’t send a picture of his face.  I’m also betting we’ll be hearing the name “Brett Favre” a lot in conjunction with this story.

This may not affect Ellis on the court, but that’s no guarantee.  We’re talking about a married guy with a kid now getting sued for sending pictures of his other “Monta, Jr.” to a woman.  A lawsuit, plus an angry wife, might prove to be too huge a distraction for Ellis to avoid.

At different times today, Warriors officials will be reading reports on both of their guards.  One will be a medical report, one will be a lawsuit.  A problem with one guard’s ankle, and a problem with another guard’s brain, could make life in Oakland a lot less comfortable for new head coach Mark Jackson.  Going into the season having to rely on Klay Thompson and Charles Jenkins more than he wanted will make the the playoffs more of a dream than a hope.