The 1992 Dream Team was not just a team hell bent on the return of basketball dominance to its rightful owners. They were playing "Johnny Appleseed," sowing the dreams of David Stern's European expansion into the fabric of the countries who witnessed their Sherman's March to gold.   It has been 20 years, and it […]

So imagine if you are a kid, just playing a pop-a-shot arcade game, knocking down some shot when Los Angeles Lakers' Dwight Howard comes in and proceeds to block your shots. Well that's exactly what happened while Howard was in China playing a game of Pop-a-Shot versus a fan. In the video below, Howard is […]

Derrick Rose just signed a new deal with the Chicago Bulls that will earn him about $95 million dollars over the next five years.  Chump change.   Pittance! Beer money at best.  That’s because Adidas is about to to pay Derrick Rose a LOT of money.  One industry source insisted to ESPN.com this week that […]

The Minnesota Timberwolves damn near beat the Miami Heat last night.  Part of the reason why was continued impressive play by Ricky Rubio, who scored 12 points on 4-7 shooting (2-2 from 3) and dropped a game-high 12 dimes.   Here’s video of Rubio setting early career highs, courtesy of Ball is Life.

The Washington Wizards are not very good.  Let’s just leave that there for a moment.  Flip Saunders’ abilities are up for some debate.  He’s got a pretty good career record of 636-514, which is on par with Doc Rivers of the Boston Celtics, who is now regarded among the upper-tier coaches in the league.  But […] 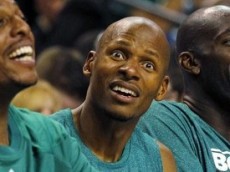 Every morning, we’ll have a look at the previous night’s action in a round up of recaps and reactions from around the web. The Big Headline After struggling to 0-3 starts, the Dallas Mavericks and the Boston Celtics took advantage of lesser opponents to get their first wins of the season.  Meanwhile, Dwyane Wade got […]

Over the past month Andrei Kirilenko has been weighing his options about returning to the NBA or finishing the season out playing in Russia. Apparently home is where the heart is. The free-agent forward and Russian superstar finally made his decision today by announcing he will remain with CSKA Moscow through the rest of the […]

Thursday, the Suns signed Michael Redd to a one-year deal, picking up the often-injured shooting guard hoping to add… more shooting. That has been how to define the Suns in recent years. Offense, offense and more offense. The championship window for Steve Nash and the Suns closed a while ago and it seems every move […]

A point guard’s job is to lead the offense, pass the ball and get his teammates scoring. Chicago Bulls coach Tom Thibodeau thinks his point guard his taking that definition too literally and it’s time for Derrick Rose to “attack!” Rose had been getting off to some slow starts in the Bulls’ first couple of […] 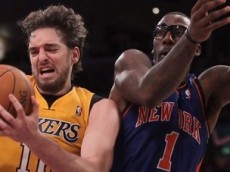 Some things in the NBA are going just like everyone thought (Miami Heat starting 3-0, Kevin Durant playing like an MVP) and some aren’t (New Orleans at 2-0, Boston 0-3).  What’s happening to the Knicks, though, was a matter of some debate.    A lot of people thought the Knicks adding Tyson Chandler would raise […]

There was no disclaimer that came with the report out of Spain today that the Portland Trail Blazers retired all-star guard Brandon Roy had arrived to meet with a team there and has been offered a contract for the rest of the season, so consider this the warning call. The Spanish-based website Solobasket reported the […]

Perhaps he was channeling the late Nostradamus, but Tracy McGrady has one bold prediction for the future of the Dallas Mavericks, Dwight Howard and Deron Williams. According to T-Mac, eventual free agents Howard and Williams will be wearing Mavericks uniforms. “D-Will is from Dallas,” McGrady said. “You’ve got Dirk Nowitzki there. They’re going to have […]

Russell Westbrook dodged the media on Wednesday after his dust-up with Kevin Durant during the second-quarter timeout that has  hoops blogs around the world talking about the beef. Instead Westbrook used his own Twitter account to speak volumes with a one-word    post Thursday afternoon: “Mindset.” Hours later before the Oklahoma City Thunder tipped off against […]

Every morning, we’ll have a look at the previous night’s action in a round up of recaps and reactions from around the web. The Big Headline  The Dallas Mavericks looked like they had their first win of the season in hand, until Kevin Durant’s three at the buzzer.  In the late game, Kobe Bryant went […]